Luwian Mysteries and the Sea Peoples. 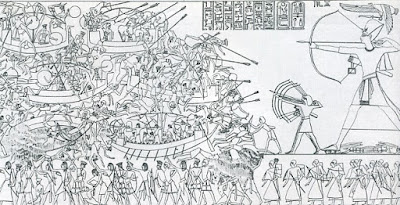 After about 1200 BCE the great states of the Middle East experienced what archaeologists call the "Late Bronze Age Collapse." Kingdoms fell, cities were sacked and abandoned, and records tell sad tales of drought, famine, and barbarian invasion. Egypt and Palestine were greatly troubled by piratical invaders they called the "Sea Peoples." Speculating about the origin of these invaders has been an archaeological hobby since the 19th century: Etruscans? Achaean Greeks? Anatolians? But until now no text has been found from the other side in which anybody claimed to have done the invading. 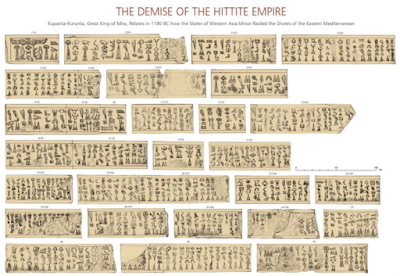 News has come from the obscure reaches of archaeology about the translation of a long inscription from Luwian that may shed some light on the question. (Directly above and below.) 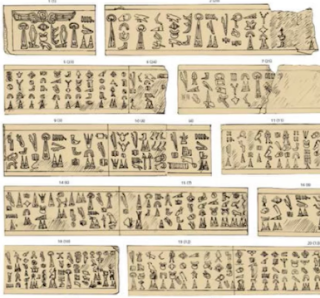 Luwian was one of the languages of the Hittite Empire, its written form in common use between about 1400 and 700 BCE. It was translated without much fanfare back in 1960 using bilingual inscriptions and its similarity to Hittite and other languages of the Anatolian sub-group of Indo-European. The inscrption deals with a kingdom called Mira:


The inscription tells of how King Kupantakuruntas ruled a kingdom called Mira that was located in what is now western Turkey. Mira controlled Troy (also in Turkey), according to the inscription, which additionally described Trojan prince Muksus leading a naval expedition that succeeded in conquering Ashkelon, located in modern-day Israel, and constructing a fortress there.

The inscription details King Kupantakuruntas' storied path to the throne of Mira: His father, King Mashuittas, took control of Troy after a Trojan king named Walmus was overthrown. Soon after that, King Mashuittas reinstated Walmus on the Trojan throne in exchange for his loyalty to Mira, the inscription says.

Kupantakuruntas became king of Mira after his father died. He then took control of Troy, although he wasn't the actual king of Troy. In the inscription, Kupantakuruntas describes himself as a guardian of Troy, imploring future rulers of Troy to "guard Wilusa [an ancient name for Troy] (like) the great king (of) Mira (did)."

Which is pretty interesting if it is correct, since making a connection between Troy and the "Sea Peoples" has been a goal of scholars for so long. Personally I am skeptical of translations from obscure languages. After all we argue all the time about the meaning of words in languages we know much better, like ancient Hebrew and classical Latin. I just read a long scholarly article about what English words like "experiment" and "fact" may have meant at various points in the 17th century. So maybe the inscription says the Trojans sacked Ashkelon and built a fort, but maybe the place is actually another town in a different region, and maybe that narrative about the royal family can be rendered in different ways. 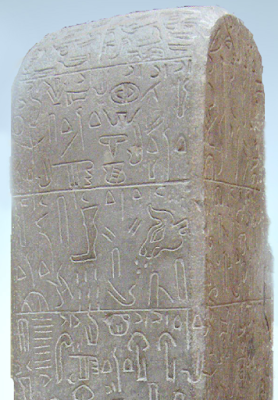 If it is genuine, that is. Because this inscription was not found on a monument or a clay tablet, but in the notes left behind by archaeologist James Mellaart (1925-2012). Mellaart is a controversial figure, to put it mildly. He made many undoubted discoveries, including the famous site of Çatalhöyük in Turkey. But he was accused more than once of misrepresenting those discoveries in pursuit of fame and in defense of pet theories; for example, comparison of the photographs of some of the wall paintings at Çatalhöyük with Mellaart's published drawings shows that in some cases he drew more than was actually there, turning ambiguous shapes into definite vultures and deer. He was eventually banned from ever digging in Turkey again because of accusations that he smuggled artifacts out of the country.

Plus the story is, well, let me just tell it. According to notes found in Mellaart's papers after his death, this inscription was discovered and copied in 1878 by an archaeologist named Georges Perrot near a Turkish village called Beyköy.


Shortly after Perrot recorded the inscription, villagers used the stone as building material for a mosque. In the aftermath of the inscription being used as building material for the mosque, Turkish authorities searched the village and found three inscribed bronze tablets that are now missing. The bronze tablets were never published and it is not certain exactly what they say.

So far nobody has been able to find any record of these discoveries outside of Mellaart's own papers. Plus, Mellaart did not claim to have seen Perrot's original transcription, but a copy of the copy made by Turkish scholar Bahadır Alkım, who died in 1981. 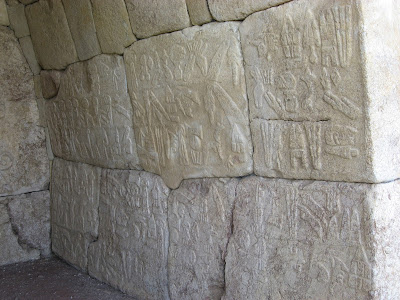 Luwian Inscription at the Hittite Capital of Hattusas

Mellaart never published his copy of the inscription, but he did mention it once in print, in 1992. His notes say that he formed a group of six experts (including Alkim) to work on the translation, but that they were unable to finish it before team members began to die; conveniently, all six were dead before Mellaart first mentioned the inscription. Since a fairly complete decipherment of Luwian hieroglyphs was published in 1960, a team of five experts ought to have made some headway before the last member of the team died in 1986; but Mellaart's papers contain no mention of any progress.

So people whose first reaction to Mellaart's name is to bristle with suspicion feel certain that this is all a hoax. The scholars who have published the new translation insist that it can't be, because Mellaart could not read Luwian. Plus there has been progress on better understanding Luwian since 1960, and the inscription conforms to modern understandings.

Me, I think it is always dangerous to base your conclusions on what somebody as clever as Mellaart could or could not have done. Until somebody finds some mention of this inscription outside of Mellart's estate, I won't accept it. Given how many other names have turned up in Mellaart's account, there ought to be some record of the inscription in their papers or those of the institutions where they worked. If there is not, I say fraud. People have long been searching for some statement from Greek or Anatolian records showing that they were the Sea Peoples, and I find this inscription too convenient to accept.
Posted by John at 8:34 AM

Or the inscription is authentic and the translation correct, but its author or the king is a braggart claiming victories not his, like some Pharaohs and acolytes did.

Historical Dramatic Plot Twist! The Sea Peoples were actually the Sea Dayaks of Borneo! Something, something, ancient astronauts, and they targetted Egypt because the pyramids were landing pads for alien spaceships! It all fits!