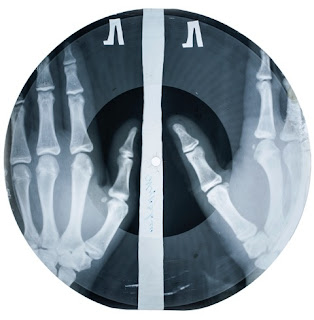 From 1946 to 1964, many people in the Soviet Union listened to banned music (like western jazz and rhythm 'n blues) on bootleg records made on x-ray film:

When it came to choosing the recording material, Coates says, discarded X-rays were an obvious choice. “ X-ray film is soft enough to be recorded on, but strong enough to hold the groove,” he explains. “It was also very easy to find: Russian hospitals had to get rid of their X-rays within one year because they were flammable, back then.”

Bogoslowsky teamed up with some friends to create the “Golden Dog Gang”: a bootlegger outfit able to get hold of smuggled vinyls and churn out tens of copies of “bone” records.

It was a laborious process yielding mediocre results: a lathe had to be positioned next to the gramophone playing the vinyl original, and it could only make one record at a time – one song at a time, in fact, as its maximum length was three minutes.

Sound quality wasn’t great either – some of the bootleggers Coates spoke with said X-ray music “sounded like sand” – and the records tended to wear off over time. Still, they were the only thing around, and they cost a few rubles. (The trade wasn’t particularly lucrative.)

Quickly, Bogoslowsky’s technique spread across Russia, as peddlers of X-ray records mushroomed at every corner of every major city.

Fascinating. I suppose the thrill of listening to forbidden music on bootleg records helped to make up for the poor sound quality.
Posted by John at 8:14 AM