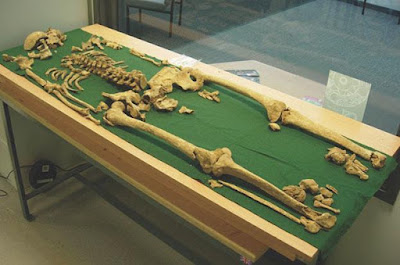 Racton Man is what the British press calls a warrior of the early Bronze Age whose grave was found near Racton, Sussex in 1989. A detailed study of his remains has just been published, and it is quite interesting.

The dagger would have been riveted to a wooden or leather handle, as in this example.

But not only was Racton Man buried with a dagger, he might have been killed with one. His left arm was certainly gashed shortly before he died, since the wound never healed, and he was likely stabbed under the right arm as well. Just the sort of wounds you might get in a knife fight.

The excavators speculate that Racton Man was a tribal chief killed in a fight over leadership. That, it seems to me, is pushing speculation pretty far. Given his size he was likely an aristocrat, but maybe knife fighting was just the way aristocrats of his time handled any slight to their honor, as later aristocrats dueled with swords or pistols. There's no reason to assume that his people fought over the chieftainship with knives like the outlaws of the Hole in the Wall Gang.

Then again, maybe they did; might make for an interesting scene in a Bronze Age historical novel.
Posted by John at 12:31 PM