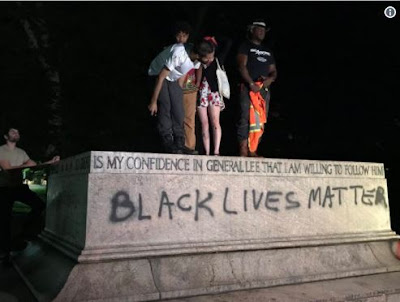 I have an acquaintance in Baltimore who has for the past year been giving tours of the city's four Confederate monuments, trying to raise awareness of them and lay the groundwork for removal. He wasn't having much luck, until events swept along and POOF, all the statues are gone. After a unanimous city council vote for removal last week, the mayor brought in a crane and whisked them all away in one night. She said, “I did not want to endanger people in my own city. I had begun discussions with contractors and so forth about how long it would take to remove them. I am a responsible person, so we moved as quickly as we could.” Probably a wise decision, considering what has happened in other places. 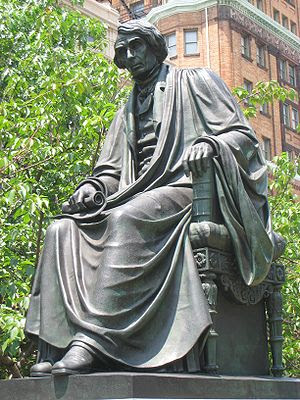 The most appalling of Baltimore's monuments was this statue of Roger B. Taney, the Supreme Court justice who is famous for only one thing: authoring the Dred Scott decision. No sugar-coating this with talk of his being a war hero or saying he really cared about state's rights, since the Dred Scott decision was intended to prevent any state from expanding the rights of black men.

Yes, it was once considered a good idea in Maryland to put up not one but two prominent monuments to the man who tried to deny citizenship even to free black people. But it's gone now, and it looks like its twin in Annapolis will be gone soon.

One of the possibilities that occurred to me when Trump won the election was that it might really shake up the country, breaking people loose from old coalitions and driving events forward in unpredictable ways. Until the past few weeks, this had not really happened. Trump won the election mainly because he got almost all the Republican votes, and he has been trying to work with the Republican Congress on traditional Republican issues.

But now the system has been shaken up in at least two ways. The Congressional health care brouhaha has led to a big shift in public opinion in favor of Obamacare and national health insurance in general. And now the Charlottesville blow-up seems to be generating a huge wave of revulsion against white supremacists and neo-Confederates, made worse by the president's ambivalence.

Maybe nothing will come of these things, either; maybe health care will settle back into the usual partisan grind, and maybe the anti-Confederate wave will break quickly like others have before it. But I think it is clear now that Trump poses at least as much of a threat to conservatives as he does to liberals.
Posted by John at 7:17 PM