What Are We Supposed to Do About It? 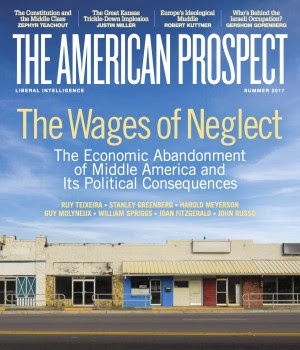 I must have seen a hundred headlines and cover stories like the above, coming from both liberals and conservatives. They frustrate me. Yes, I get it that wide swathes of America are not doing very well economically. If you need more numbers, Harold Meyerson has them in his contribution to the Wages of Neglect feature.

But what are we supposed to do about it? What magic wand do we have that will create jobs in the towns and small cities of Pennsylvania, Wisconsin, and West Virginia? Meyerson makes the usual noises about infrastructure spending, but honestly the places that most need new infrastructure are rapidly growing cities, and the places that most need spending on repairs and maintenance are old cities. There just isn't much infrastructure to build in central Kansas or southern West Virginia. Other than wind and solar farms, I guess, but those aren't very popular with working class voters and we're already building them pretty fast anyway. Otherwise Meyerson just says vague things about "regional development policies" that I find utterly unimpressive.

In his contribution, Stanley Greenberg dwells at length on the bad politics of bailing out Wall Street while regular people in small towns were losing their houses. Which I agree was bad politics, but was it really bad economics? Does anybody think the economy of small towns would have been better if we had let Wall Street implode? And would jailing a few dozen executives, however morally righteous, have created a single job? Greenberg also spends some time on trade, but whatever the politics of trade agreements their impact on the economy is fiendishly complex; they kill jobs but they also create them, leaving economists to argue furiously about the overall result.

Paul Ryan conservatives just push for lower taxes and less regulation, which if you ask me is how we got to this place. Trump's people have no ideas at all.

Manufacturing employment is declining almost everywhere, from China and India to Switzerland and Sweden. I do not believe we can do anything about this. Maybe different trade and regulatory policies crafted by all-knowing experts would have led to a smaller decline in the US, but I doubt the overall story would be different. The world economy is leaving factory workers behind.

There are a few things we could do, especially in the line of health care policy. Real national health insurance would pay for thousands of jobs in declining areas, besides helping the people who live in them. And if that health insurance paid for addiction treatment and other mental health care, that would also both create jobs and make life better. If we raised taxes on the rich even more we could do other things, like free community college (which would at least create jobs for teachers) and subsidies for upgrading houses, and so on.

But on the whole I doubt the ability of any government to change the basic economic facts. Consider: the places that are troubled include Democratic bastions like Detroit and Republican strongholds like rural Kansas. The two states that have lately been most spectacularly successful are California and Texas, which are pretty much political opposites.

I believe that Obama understood perfectly well how poorly neo-liberalism was working both economically and politically in much of the country. Yet he also believed that there was no other course: more openness, more trade, more immigration, more education, more meritocracy is the only path that might possibly lead to a more prosperous future.

I hate to write off so many people and places, but I also don't really see what we could be doing instead.
Posted by John at 8:11 PM

1. Spend less on the military. We spend more than all the other major world powers combined, which is flatly insane.

This will probably require us to rethink our foreign policy, to stop being so meddlesome and belligerent, and to focus more on bolstering and supporting defensive agreements like NATO, the EU, the United Nations, et cetera. We are not the world police. We need to stop flying solo and start being team players.

2. Raise taxes, specifically on the richest segments of society.

Imagine a society where the poorest 40% of people suddenly had over 17x as much money and resources. Meanwhile, the ultra wealthy are only dropping to 0.8x as much money as they had before, which is 4/5ths. They're still filthy stinking rich, have all the money they could ever need, and can continue to live their lives in the lap of luxury.

Obviously these are back of the envelope calculations, and you'd need to have professional economists work out the actual numbers and fine details, but the fundamental answer is staring us in the face. Our rich are so obscenely wealthy that even a rather small tax on them could quite literally double the wealth of everyone else in the country.

And yet, it seems no one wants to even consider the possibility. Certainly no politicians do. I wonder why? Could it be they're financially beholden to the wealthy to stay in power? Hrrmm.

2a. Let's make some new anti-corruption laws too, while we're at it.

Make our politicians live off the salaries on par with those of people like schoolteachers or nurses or sanitation workers. Strictly control all other income they're allowed to receive. Abolish private campaign funding, replacing it with government stipends for registered parties, ensuring a fair playing field for all competitors.

Politicians are supposed to serve the people, not the other way around. We need to de-commercialize the machinery of the republic, and turn political office from a career devoted to self enrichment, into a duty devoted to societal benefit.

3. Spend the money from those new taxes on the public good.

Do all the things you point out in your own post. Build infrastructure where it makes sense to do so. Invest in healthcare to not only make people healthier, but to create medical jobs all across the country. Invest in improving the quality of public education at all levels, again, helping people and creating more jobs. Invest in housing, also accomplishing those same two things.

There are so many, many things we can and should be doing to make society better. We need to be investing in our communities and each other. But we refuse to find the money for it, and instead keep building more bombs and guns, and keep letting people isolate themselves and build walls to shut out the rest of the world.

Maybe there isn't much we can do about the economy overall. But we damn well can things to change the details of how it all plays out.

Lean times for the poor in this country means sickness, starvation, suffering, desperation, and even potential death for millions! But for the rich, the exact same economic losses just mean not quite so many obscene luxuries for a tiny minority of obscenely privileged elites!

Why, why, why, why do we keep letting the rich get richer, and keep forcing the poor to get poorer? Why is it when people bemoan the suffering of the poor due to economic hardship, no one ever suggests "Tax the richest and use that money to help the poorest!" I thought people agreed a long time ago that Reaganomics doesn't work? We know that the "trickle-down" effect is a sham.

When people are starving, the solution isn't to ensure the best fed people in your country get to keep the most food, on the basis that they'll hand their scraps down to the poor! The solution is to take away some food from the fat gluttons stuffing their faces, and give it wholesale to those who are starving! And if some glutton complains that now they only get to eat 4 chocolate cakes in a row instead of their usual 5 of them, you ignore them and their disgusting greed and selfishness, tell them to suck it up and tighten their belts, and keep doing what is necessary to feed those who are truly starving.

"Does anybody think the economy of small towns would have been better if we had let Wall Street implode? And would jailing a few dozen executives, however morally righteous, have created a single job?"

Perhaps we should be a tiny bit morally righteous? And outraged!

When greedy wall street executives who created the credit crisis walked away with millions instead of being incarcerated, the powerful and influential sent a clear message to those whose lives were ruined by the crisis: You don't matter. We continue to send that message. Might as well have sent bulldozers to their towns and leveled them. Lloyd Blankfein still runs Goldman Sachs; he should have the decency to retire instead of giving advice to fawning business reporters on how to improve the economy. Who should trust him?

The fallout from the crisis was never just about jobs, but about -- maybe mostly about -- greed, lopsided power, and, dare I say, unethical and immoral behavior. I doubt there is a single Wall Street player involved in that crisis who didn't know where it was headed. If ever there was a signal sent that the idea of community is dead, that was it. If ever there was an example of the ugly side of capitalism, that was it, and what's worse, the government validated that point of view by letting so may walk away without penalty.

Trump wasn't sent to Washington to make things better, to drain the swamp; he was sent there to piss on it, and he is. So now we come to the debt ceiling. All the experts say we can't default and no one in congress, despite what they say, is willing to default. Well, I think the experts are wrong again. I think there are at least 40 congressmen (and millions of pissed off people) more than willing to send the powerful into the abyss just to get even.

I would certainly have prosecuted somebody on Wall Street for the crisis; I'm not saying I like the way it played out. I simply resist that idea that we could make the economy of troubled regions better just by paying more attention to it. That the problem with West Virginia and Kansas is that nobody in the elite cares.

Manufacturing decline is happening for technical and economic reasons, not because coastal elites are selfish.

There is a shortage of craft workers -- electricians, plumbers, roofers, heating/air conditioning, etc. How many people who have lost manufacturing jobs might be good, possibly already skilled, at such crafts? Yet all we talk about is computer training, and getting expensive college degrees.

Your arguments against the idea the *economic* "problem with West Virginia and Kansas is that nobody in the elite cares" are persuasive. But surely alienation between coastal elites and heartlanders is part of the reason for the psychological and cultural--and hence political--issues in the heartland?

Absolutely, there are serious cultural divides in America, and these have political repercussions. And we could all work on shedding our contempt.