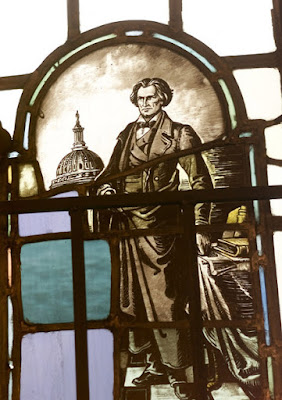 At Yale, a major focus of last year's angry student protests at Yale was the name of Calhoun College, which honors prominent 19th-century politician and racist John Calhoun. Yesterday it was announced that the name will be changed to honor Grace Hopper. Hopper (1906-1992) was a pioneering computer scientist (said to be the author of the first compiler) and ended up as a Navy rear admiral.

To me, this unfolded in exactly the right way. In the heat of the protest season the university stalled, announcing the formation of a study committee. Old institutions shouldn't make big decisions like that in a casual way. But once they had had time to reflect and to feel out the professors, the alumni, and the non-protesting students, they acted.

I also think it was the right decision. Calhoun College was opened in 1933 and there were protests over the name even then. Calhoun (1782-1850) wasn't just a typical man of the 19th century, but one who was notable for his racism at the time, and whose arguments helped advance the movement for southern secession. Yale is also adding two new colleges, and one of them will be named for Benjamin Franklin. Students also protested that designation, since Franklin at one point owned slaves and carried advertisements for slave sales in his newspapers. Besides which he is the author of numerous slurs against German immigrants, women, and probably others. To me, that is going too far, because for his time Franklin was notably liberal. Throughout his career he was a strong defender of American Indian rights, and toward the end of his life he became one of the new nation's loudest advocates for the abolition of slavery. If a college can't be named after him, then nobody who lived before 1960 is safe.
Posted by John at 8:23 AM

Some people just look for any excuse to be offended. You have to dig pretty deep to find fault in Franklin, and then you have to ignore the extenuating circumstances of his life and deeds.

Pretty much all of the founding fathers of America were slave owners at various points, since the economy of the colonies was so heavily reliant on slave labor in the first place. Anyone who didn't own slaves likely wasn't rich or influential enough to be a leader of any significance in the colonies, so almost by definition the people who are going to lead a revolution and stage a war of independence are going to be the people who own the slaves whose labor the entire colonial system relies upon to exist.

That said, I'm elated to hear that Calhoun's name is being removed, because his is the opposite situation entirely - someone whom you have to dig pretty deeply to find extenuating circumstances for, and even then you have to ignore his most egregious faults. No one is perfect, but if you're struggling to find the good in someone and jumping through hoops to excuse their awful behavior, they probably aren't someone you should try to lionize.

Ummm... John Adams never owned slaves, though there were slaves in Massachusetts at the time. Adams was never "rich," but I believe we can fairly say he was "influential." :) Also, from what I've been able to find, Roger Sherman never owned slaves, and he was influential enough to be a CT signer.

I'm especially delighted that Calhoon College is now Grace Hopper College. Hopper is one of my heroes.