Ancient California was a Violent Place 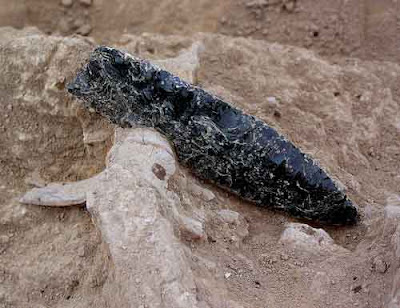 A new study of skeletons dating to between 1,000 and 500 years ago shows a high level of violence among California's ancient Indians:


About 7 percent of the population at that time had evidence of forced traumas, whether they were shot by an arrow, stabbed or bludgeoned. For females it was 5 percent and for males it was 11 percent, a percentage of violent trauma not even reached during World War II.

Two years ago another study that looked at more than 16,000 skeletons from across 5,000 years came up with similar numbers:


The data reveal that the most common type of violence over the millennia was so-called sharp-force trauma, caused by projectiles like arrows or atlatl darts, which appeared in 7.2% of the burials studied.

Another 4.3% of the hunter-gatherers suffered apparent blunt-force trauma to the head, while just under 1% showed evidence of dismemberment, with limbs, scalps, or heads having been removed after death.

Native California was an interesting place. It was about as densely populated as the east coast, but while Indians in the east were farmers, those in California relied entirely on hunting and gathering. There was no intensive agriculture, although there was management of the landscape to increase the yields of valuable plants, for example by controlled burning. The people lived mostly small groups that spoke at least 64 different languages from several different families. The obvious interpretation of the level of violence would be that population pressed against the limits that the land could support without farming, leading to constant clashes over valuable resources like fishing spots or productive nut groves. But of course it might have been religion or tribal hatreds or all sorts of other things.
Posted by John at 7:38 AM

I am always very suspicious of deductions of intentional trauma wounds from skeletal remains, particularly when they seem to imply a high degree of confidence. Bones are damaged or decay over time in a fashion that mimics wounding; accidents (certainly far more common than now) cannot be told from intentional wounding; and the rumor circulates among Classical archaeologists that the physical anthropologists found a higher proportion of alleged "wounds" from violence among sets of "normal" dead in Roman antiquity than in the gladiatorial cemetery at Ephesus. On the other hand, I am sympathetic to any study that implies that folk beyond the veil of history were not all peaceful proto-Sierra-Club members.