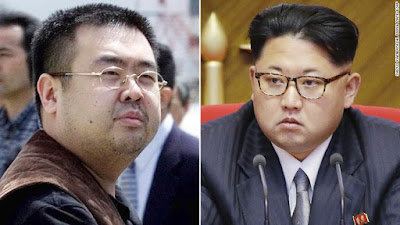 While you were celebrating Valentine's Day you might not have noticed a strange story out of Malaysia. In the Kuala Lumpur airport, a man whose passport identified him as Kim Chol was killed by two women, who (reports vary) either stabbed him with poisoned needles or sprayed poison in his face. He made it to a ticket counter to ask for help but died en route to the hospital.

South Korean media then revealed that Kim Chol is actually Kim Jong-nam, the older half brother of North Korean dictator Kim Jong-un. Kim Jong-un has killed scores of enemies or imagined enemies since taking power in 2011, so everyone is assuming he was behind his half brother's death.

I love the detail that Kim Jong-nam was purged from his post as heir-apparent in 2001 after trying to visit Tokyo Disneyland with a fake visa. I mean, some people want ultimate power, and some just want to visit Disneyland with their kids. It sucks when the ruthless ones end up murdering the slackers, but it is an old theme in human history.

War I can understand: open violence, open hatred. But the murkiness that surrounds murderous dictators and kings is a complete mystery to me. How can anyone live like that? And why would anyone want to?

I guess that puts me in the Disneyland faction.
Posted by John at 7:45 AM