Why I Hate Concept Art 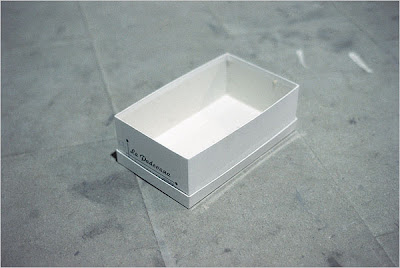 Mexican "artist" Gabriel Orozco has a major retrospective at the Museum of Modern Art right now. One of the works included is this magisterial creation, titled "Empty Shoe Box." Words fail me. The centerpiece of the show is a whale skeleton that actually looks very cool, but it strikes me that the work was really done by the whale. All that diving and eating and hiding from whalers it did to grow huge and strong, and here is some artist taking credit for its skeleton?

On the other hand I think the creation below, put up at Burning Man in 2008, is really cool. 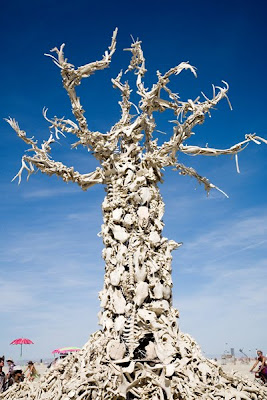 I can see why "Empty Shoebox" could be pretty irritating. But is it really the amount of work put into a piece that makes it worth looking at?

I can imagine many a thinker has completed a multi-volume life's work, only to find that all anyone remembers is some essay he tossed off carelessly when he was twenty-five. My point is not that the shoebox is like a brilliant essay, but that the amount of work is not what determines whether a given production is worthwhile.

No, the amount of work is not the main thing.

A good case: every quote you ever read from Lord Acton is from one private letter. His three volumes of published essays are unreadable. (I know. I tried.)

But, however idly it was tossed off, "all power tends to corrupt and absolute power corrupts absolutely" is a great line. An empty shoebox is just an empty shoebox.

Good to know that about Acton; I had been wanting to try his essays.

But it the issue isn't the amount of work, what is it?

(Since we can't put much work into these posts, here's your chance at Actonian immortality.)

Hey, if you want to try Acton, I have three fat volumes on my shelf I would love to get rid of....

I would refer you to the great Ruskin/Whistler lawsuit:

Ruskin's barrister asked Whistler how long it took him to "knock off" a picture. Whistler said this one was completed in a day or two. Barrister: "The labour of two days, is that for which you asked two hundred guineas?" Whistler: "No, I ask it for the knowledge I have gained in the work of a lifetime."

Possibly; certainly one could say that Acton's famous lines are the distillation of a life of experience in politics. And indeed a great artist can sometimes make something rather wonderful in a moment, like Picasso drawing bulls with a flashlight.

But I think this is a slippery slope situation. It often happens that artists get lazy or sloppy and toss off mediocre work in a hurry, confident that it will sell because of their reputations, or even thinking that it must be good because they are geniuses. It is the work that matters, not the time put in or the vast expertise behind it.