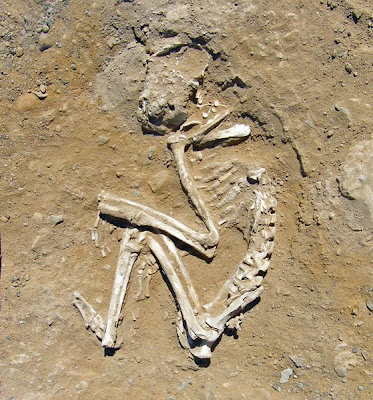 Among Archaeology Magazine's "Top Ten Discoveries of 2009" was one I missed:

Strange animal burials at the ancient Egyptian capital of Hierakonpolis point to the existence of a large, exotic menagerie around 3500 B.C. The 2009 field season produced 10 dogs, a baby hippo, a hartebeest, a cow and calf, and an elephant. The tally for this Predynastic period zoo now stands at 112 critters, including 2 elephants, 3 hippos, 11 baboons (one is in the picture), and 6 wildcats.

The animals show no signs of death by violence; on the contrary some have healed bone fractures that would probably have killed them in the wild. Perhaps they were captured after being wounded during the hunt, or found after they had been injured naturally; either way they healed in a protected environment. The late Neolithic settlement at Hierakonpolis was the largest in Egypt and the seat of powerful kings and substantial temples.

People like to have animals around. This seems to be one of the constants of our history, at least over the past 15,000 years. We put some animals to work, we eat some, and we play with others. Underlying this variety of behavior is a remarkable constant, the degree of comfort we feel around animals of other species. This strikes me as noteworthy, and so far as I know it is unique among primates. I wonder if this trait was somehow selected for, or if it was just another strange product of our growing brains. I also wonder when we started on this path. The first evidence is our domestication of dogs about 15,000 years ago, but I bet that was just a more-or-less accidental byproduct of a relationship with animals that goes back much further.
Posted by John at 7:06 AM

But did he tell us to let them sleep in our houses?