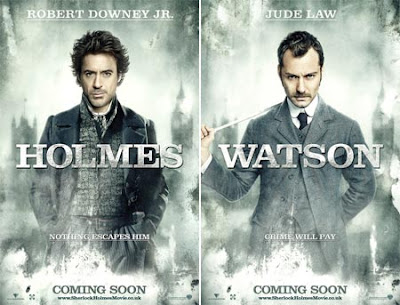 Lisa and I saw Sherlock Holmes last night, and we both loved it. I thought it was the most fun movie I've seen in years. Downey and Law were both terrific.

Some of my daughter's friends from the high school Literary Arts program are boycotting the movie because it does so much violence to the original stories. I have been a fan of the original stories since my mother gave me a lovely annotated volume for my 16th birthday, and I think this is silly. I think one of the greatest things a writer can achieve is to create a character who lives on and on in many stories and many versions, like Sherlock Holmes or Batman. It is inevitable that such a character will change over time and be shown differently by different writers and directors, and I think that is great. Besides, the characters of both Holmes and Watson vary somewhat across the original stories, which were written in two groups separated by an 8-year hiatus. Holmes is said to be a champion boxer and fencer and he gets into several fistfights, besides all the sneaking around he does in disguise. Watson generally appears as a stupid fellow whose main contribution is to say "Holmes! That's extraordinary!" but in a few stories he is resourceful and useful, especially The Hound of the Baskervilles. On the subject of authenticity I should point out that the Hound is the only story in which I can recall Holmes wearing a deerstalker cap; as a proper Victorian gentleman he would never have worn a hunting cap in the city.

So, anyway, I didn't mind in the least that director Guy Ritchie turned this Holmes story into an action-adventure thrill ride. If the overall tone is not very Holmesian, many of the details of the plot are exactly Arthur Conan Doyle's sort of thing, like the obscure poisons derived from strange eastern plants and the analysis of mud from various parts of London. So this Sherlock Holmes joins the pantheon of my favorite light movies, along with another that does just as much violence to the Holmes legend: The Seven Percent Solution, in which Holmes is lured to Vienna to be treated for cocaine addiction by Sigmund Freud. (1976, directed by Herbert Ross, based on the novel by Nicholas Meyer)
Posted by John at 9:09 AM