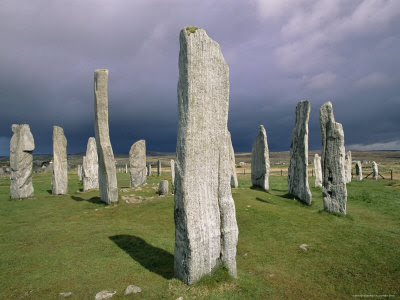 I just finished another book by Alistair Moffat, Before Scotland: the Story of Scotland before History (2005). This covers the place now known as Scotland from the retreat of the glaciers down to the ascension of Kenneth MacAlpin, the first King of Scotland, in 840 AD. It is a fascinating book and it made me long to visit the Orkneys and the Western Isles, to hike the high moors and see crumbling castles and ancient standing stones. There is lots of fascinating archaeology in northern Britain, and Moffat does a good job both of explaining its significance and calling attention to the really cool bits: the Tomb of the Eagles, the megaliths, Pictish Symbol Stones, Runic scripts, the way memories of Roman engineering lingered among the tribesmen after the Romans were gone.

My complaint is not really that Moffat has made mistakes, which he has, but that his mistakes all tend in the same direction: toward exaggerating the degree of continuity across the millennia. He starts by taking too seriously the results of the first genetic studies of the British population, which said that most British people today are descended from the Mesolithic inhabitants of the islands. This is no longer the majority view among geneticists, and even the more recent studies are to my mind highly speculative. By Moffat seizes on the provisional results and assumes they are true, because they confirm his desire for a blood connection to the ancient inhabitants of his land. He pretty much glosses over the problem of how the Britons came to speak Indo-European languages. It has long been assumed that the Gaels of western Scotland immigrated from Ireland in the centuries around 500 AD -- that's what they wrote in their in their own histories, and their language is related to Irish rather than Welsh -- but Moffat waves this away, citing unspecified evidence that Gaelic speakers had been in Scotland for much longer. The identification gets really weird when he comes to the wars between the Caledonians of North Britain and the Romans -- "us", he calls the northern tribesmen. I suppose this is not really any weirder than the habit of identifying with the Romans and their civilization indulged in by most British intellectuals, but it really is stretching things to imagine an identity that stretches across 2000 years of invasion, war, and every other sort of upheaval, not to mention vast social and technological changes.

My review of Moffat's The Sea Peoples is here.
Posted by John at 7:58 AM