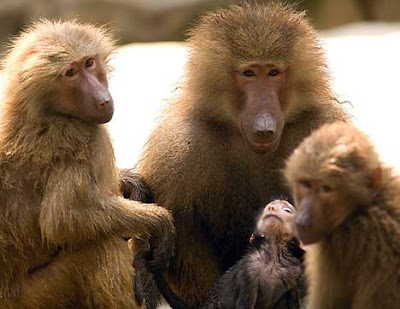 Smuts was following a small group of Gombe baboons on the eastern edge of Kenya. She'd been with them seven days a week for weeks and weeks, joining them before dawn, spending 10 hours a day just following, watching and taking notes. One day the whole noisy group was ambling back to its "sleeping trees" along the shore of a stream. "I followed them walking along this stream many, many times before and many times after," she says, "but this time was different."

All of a sudden, Smuts says, "without any signal perceptible to me," every one of the baboons, the adults, the little ones, all of them, stopped walking and sat down on the edge of a pool of water. They not only stopped walking; they stopped talking. "Even the little kids, and you know kids are always making noises, but even they got quiet."

The quiet was total. "I really wondered what was going on," says Smuts. The baboons didn't focus on any one thing. They all, or most of them, gazed down into the little pool right below them and hardly moved. There was no fidgeting, no touching or grooming, no discernible activity, just a communal "almost sacramental" contemplation. Smuts calls it a "sacred" quiet.

Then, after a short period of time, "again with no perceptible signal," the troop came alive and resumed its noisy walk down the stream.

The possibility that larger-brained mammals have experiences we would describe as "spiritual" is one of the oddball questions hanging out there in the wilds of zoology. Elephants and chimpanzees in particular seem to do things that strike us as ritualistic or reverential, but it is very hard to know what those acts mean to the animals performing them. Despite what dog and cat owners are always telling me, I believe we have very little idea what happens in the brains of other species. What does it feel like to be a baboon? Does the world seem full of mystery to them, or just food, danger, and allies?
Posted by John at 7:31 AM