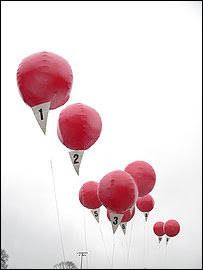 On Saturday, the Defense Advanced Research Projects Agency set out to learn how quickly people could use online social networks to solve a problem of national scope.

The answer: 8 hours 56 minutes, at least when said problem involves $40,000 and a bunch of red balloons.

In DARPA's Network Challenge, tied to the 40-year anniversary of the Internet, the Department of Defense's research arm placed 10 weather balloons in public places around the country. The first team to locate and submit the balloons' correct geographic coordinates would get the cash prize.

The winning team, from MIT, used the old-fashioned capitalist approach: they promised to divide the prize money among all the people who helped them find the balloons.
Posted by John at 8:07 AM