More on Cannibalism at Herxheim 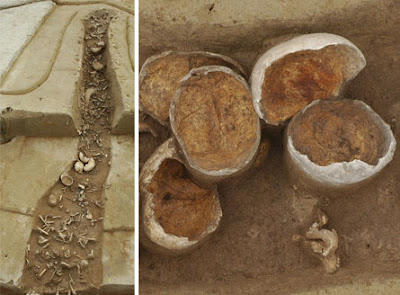 I wrote previously about the evidence of large-scale cannibalism at a neolithic site near the German village of Herxheim. That evidence has been questioned by analysts who think the bones were reburied at the site after the flesh had been scraped off them elsewhere. The authors of the original study are sticking to their interpretation, though:


The pits that surrounded Herxheim provided no protection from invaders but may have marked a symbolic boundary for a ceremonial settlement, Boulestin proposes. At first, Boulestin’s team, like Orschiedt and Haidle, thought that the dead were brought to Herxheim for ceremonial reburial.
But Boulestin and his colleagues’ opinion changed after they analyzed 217 reassembled human bones from one deposit, representing at least 10 individuals.
Damage typical of animal butchery appears on the bones, including that produced by a technique to separate the ribs from the spine, the scientists say. Heads were skinned and muscles removed from the brain case in order to remove the skullcap. Incisions and scrapes on jaws indicate that tongues were cut out. Scrape marks inside the broken ends of limb bones indicate that marrow was removed.
People most likely made the chewing marks found near intentionally broken ends of hand and arm bones, Boulestin says.
Ongoing work at Herxheim has found signs of cannibalism on the bones of hundreds of other individuals, with only a few exceptions, he adds.
But proving that ancient Europeans consumed human body parts “is nearly impossible,” Orschiedt and Haidle assert. The absence of lower jaws and skull bases from the new Herxheim material favors a reburial scenario, the researchers say, in which these components were ritually removed before skulls were placed in pits.

Either way, I pause to note that some of the ways people play with the bones of their dead relatives -- cutting off all the flesh, making tableaux with the bones, separating the skulls and putting them on the mantle -- are really weird. (Those are jawless skull caps in the right part of the picture above.) Personally I think the evidence for cannibalism at this and other sites is very strong, and that people who reject it just have a hard time believing in cannibalism. And I don't see why, given all the other bizarre and morbid things we like to do. As British anthropologist Nick Thorpe notes,


Whatever actually happened at Herxheim, facial bones were smashed beyond recognition, “giving an impression of the destruction of individual identity, a kind of psychic violence against the person." 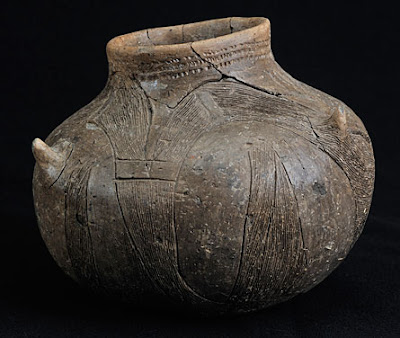 The ongoing analysis has also shown that some of the pots found in ritual contexts at Herxheim, like the one above, were made as much as 400 km away, supporting the idea that this was some sort of regional religious center.

UPDATE: More on this site and the evidence for cannibalism here; and see here for another site of Neolithic cannibalism in Germany, the Virgins' Cave.
Posted by John at 9:51 AM