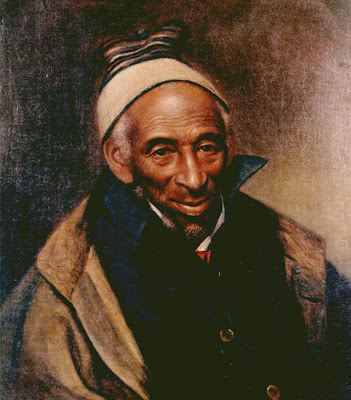 Today I met James Johnston, who is writing a book about Yarrow Mamout and his family. Yarrow Mamout was a man from the Senegambia area of west Africa who was captured by slavers, shipped to America and sold in Maryland in 1752. He belonged for decades to Samuel Beall of Georgetown, who owned a mill in Rock Creek Park where I did some excavations. It is possible that Yarrow worked there. Yarrow may also have worked at the Antietam Ironworks, of which Samuel Beall was part owner, and where I have also done excavations. Yarrow was freed in 1797. According to Yarrow, his master freed him because he thought Yarrow was used up. But Yarrow had plenty of work left in him, and he earned enough money as a free man to buy a small house and enough bank stock to retire on:

We know about Yarrow from a sort of gossipy guide to Washington published in 1816, from which the above comes, and because Charles Willson Peale painted his portrait in 1820. Peale also interviewed both Yarrow and the daughter of his former owner, and wrote an account of these conversations in his diary. Peale painted Yarrow partly because he was interested in longevity, and by that time Yarrow was claiming to be 140 years old. Actually, he was about 84, but since he had outlived all the people who had enslaved and owned him, perhaps he can be forgiven a little gloating exaggeration. Yarrow was by then a modestly famous character, known for his old age, his long life of hard work, and his practice of Islam. Peale wrote of him:

Yarrow owns a House & lotts and is known by most of the Inhabitants of Georgetown & particularly by the Boys who are often teazing him which he takes in good humour. It appears to me that the good temper of the man has contributed considerably to longevity. Yarrow has been noted for sobriety & a chearfull conduct, he professes to be a mahometan, and is often seen & heard in the Streets singing Praises to God -- and conversing with him he said man is no good unless his religion comes from the heart . . . The acquaintance of him often banter him about eating Bacon and drinking Whiskey -- but Yarrow says it is no good to eat Hog -- & drink whiskey is very bad. I retouched his Portrait the morning after his first setting to mark what rinkles & lines to characterise better his Portrait.

Some people lead amazing lives. James Johnston published a nice account of Yarrow and his researches in the Washington Post, which you can read here.
Posted by John at 4:53 PM