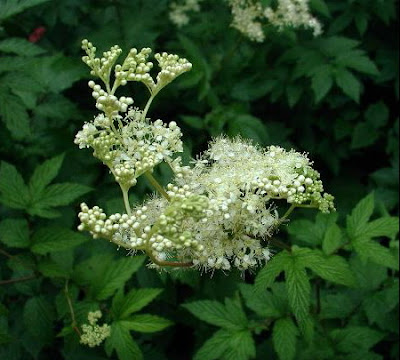 Archaeologists in Scotland have found meadowsweet flowers in a bronze-age grave, the first good evidence of prehistoric people placing flowers in a burial. (If you thought pollen from a Neanderthal grave showed they did this, sorry, that has been discredited.) The corpse had been placed in a birchwood coffin.

Meadowsweet is a common herb favoring damp meadows, which bears small white flowers in the summer. Because of its pleasant smell, it was commonly used among the rushes that medieval and earlier people spread across the dirt or stone floors of their homes. It was also used to flavor beer.
Posted by John at 8:42 AM