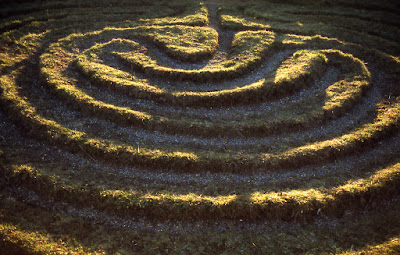 There are in England about a dozen turf mazes called Troy Towns. The name goes back in England to Renaissance times, when building these was in vogue. 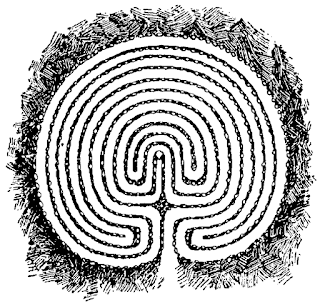 They mostly follow this particular shape of labyrinth, rather than the round or square kind. 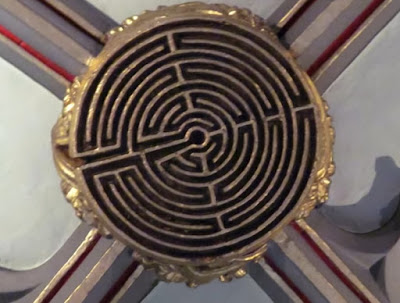 Which is interesting because most of the known medieval labyrinths in England and France are round, like this 15th-century ceiling boss in St. Mary Redcliffe, Bristol. 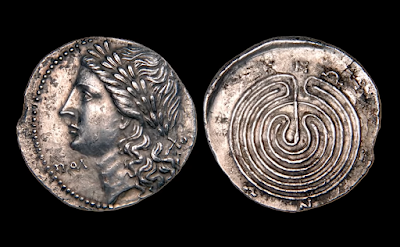 The Renaissance labyrinths follow instead a version well known in the ancient world, as on this Hellenistic coin; the head is Apollo, a god sometimes associated with labyrinths, especially in connection with his birth on Delos.

The name Troy Town may also be ancient; the text written across the labyrinth symbol on this Etruscan win jar, dating to around 600 BC, seems to spell out TRUIA, which people think might mean Troy; at least, nobody seems to have any other suggestions. There was also a Roman equestrian event called the Troy Game, which people think involved riding in a labyrinth-like pattern, but this is pretty obscure. I have not found any source which says how the name "Troy Town" might have been passed down, despite the immense effort put into the question by mystically-minded scholars, professional and amateur. It seems to appear in no medieval source. So if the name is classical as well as the image, nobody seems to know how it was preserved. 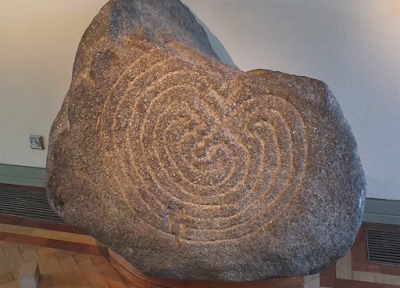 The image is certainly ancient, going back to the pre-Roman iron age, and widespread; this is the Hollywood Stone from Ireland, dated to around 550 AD. 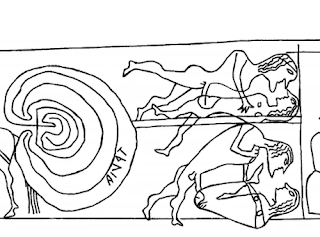 As to what it means, I think our Etruscan wine jar might be a clue; this is some kind of fertility symbol, probably because it makes the ancient, very widespread symbol of the labyrinth look like a woman's private parts. 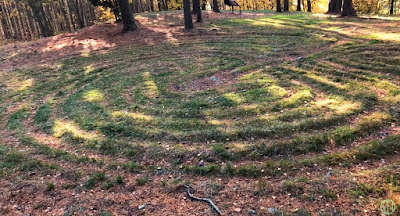 To me the weirdest thing about this sort of labyrinth is that there are still hundreds in the world, almost all of them in Germanic northern Europe. Sweden, in particular, has more than 200. They have two traditional uses. In one version couples who are dating, or about to be married, or actually on their wedding day, walk the maze hand in hand while trying not to step off the path or let go of each other, success being some kind of good omen. Which makes sense with the ancient tradition.

But there is another tradition, which seems to be at least 200 years old, which I will let wikipedia explain:


There were once many hundreds, perhaps even thousands, of these labyrinths around the Baltic Sea, throughout Fennoscandia and the Baltic countries, and many of them still survive, particularly in remote areas. There are also similar stone labyrinths in the Kola Peninsula and coasts and islands of the White Sea, such as Stone labyrinths of Bolshoi Zayatsky Island. For some reason these northern labyrinths are almost all close to the sea. Some have suggested that they were markings of seafarers, perhaps even used for navigation. Many of the stone labyrinths around the Baltic coast of Sweden were built by fishermen during rough weather and were believed to entrap evil spirits, the "smågubbar" or "little people" who brought bad luck. The fishermen would walk to the centre of the labyrinth, enticing the spirits to follow them, and then run out and put to sea.

Weird. Incidentally these are also called Troy Towns in Swedish, and again nobody can say where the name came from.

So these are a fun distraction, a bit of modern mystery with very ancient mystical associations.
Posted by John at 7:44 AM

The maritime usage seems like it could be related to the "fertility" usage, given that number of cultures personify the sea as a woman, a lover, or even a wife - and often a temperamental one that requires regular ritual appeasement.

As for entrapping evil spirits of bad luck, one reason I can think of for doing so at a site built to resemble a fertility symbol might be if those spirits are somehow associted with a sailor's struggles against pent up carnal desires while away at sea.

If you're already willing to blame unpredictable phenomena like accidents and bad weather on spirits, it's not much of leap to then also blame poor conduct and fighting among physically deprived frustrated sailors stuck at sea on those same spirits.