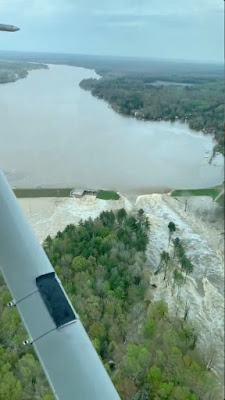 Two dams on the Tittabawassee River in Michigan failed yesterday, resulting in evacuations in Midland and other places.

Which is absolutely no surprise to anyone who has been following the slowly unfolding dam safety crisis over the past 30 years. In America we have pretty much stopped building dams, preferring to let rivers run free and get our power and water in other ways. The turn against dams has also impacted their maintenance, making it harder to spend any money on them. Every such proposal is greeted by opponents who say, "Quit wasting money and just tear the thing down now." So unless the dam is manifestly important, it is hard to get money to fix it. Plus many dams were built by private companies that have disappeared, leaving their old dams stranded. Over the years the problem has built until the US now has thousands of dams the Corps of Engineers considers unsafe. I know about this because cultural resource evaluations are part of most plans to fix or demolish dams, and we regularly hear from our clients about how many dams require treatment. But the rush of business my bosses keep projecting from this line of work never materializes because, again, the money isn't there.

So look for more dams to fail every year for the rest of your life. The good news is that most unsafe dams are not very big, so the damage will be limited and the loss of life small.
Posted by John at 7:46 AM

Yet another example of how broken our government is and how idiotic and out of touch our spending priorities are.

We spend $20.2 billion every year on providing air conditioning alone for US soldiers in Iraq and Afghanistan, and yet we can't find the same amount of money to dedicate to either fixing or safely removing countless failing dams.

It is official US doctrine that we be prepared at any given moment to fight up to three simultaneous oversea wars successfully, and yet we're unwilling to fix infrastructure at home that has been crumbling and neglected for decades. We'll dump trillions of dollars and sacrifice countless human lives in order to reduce other countries to smoking rubble, but we can't find the money to fix our own country.

And we're the richest country on the face of the planet. Disgraceful.