The Precise Odor of Empire 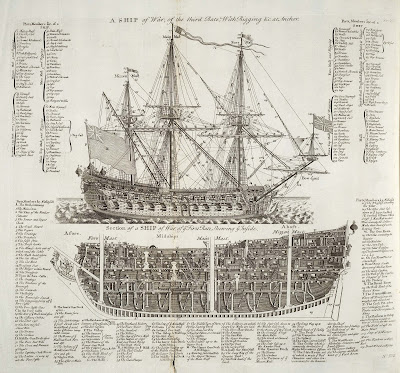 
The king had agreed to dine that June afternoon aboard the ninety-gun Barfleur, and as he clambered to the weather deck, sailors hoisted his royal standard to the main topmast head. . . .

More than two thousand mature oaks had been felled to build a ship like this, the biggest, most complex machine in the eighteenth-century world, the steam engine and spinning jenny be damned. The king admired the massive oak balks, the knees chopped from tree forks, the thick planks wider than a big man's handspan, the gun decks painted bright red to lessen the psychological shock of blood spilled in battle. Twenty or more miles of rope had been rigged in a loom of shrouds, ratlines, stays, braces, and halyards. Masts, yards, spars, tops, and crosstrees rose overhead in geometric elegance. Even at anchor this wooden world sang, as timbers pegged and jointed dovetailed and mortised, emitted creaks, groans, and squeals. Belowdecks, where each sailor got twenty-eight inches of sleeping width for his hammock, the powder monkeys wore felt slippers to avoid creating sparks in the magazine. The smells of tar, hemp, pine pitch, and varnish, mingled with the brine of bilgewater and vinegar fumigant and the hog-lard pomade the sailors used to grease their queues. All in all, it was the precise odor of empire.

Ropewalks are one of my favorite kinds of buildings. In order to twist fibers into a 1,000 foot long rope (the standard for British ships), you need a building long enough to lay the strands out in a flat line to do it in - with a bit extra length on top, since braiding a rope shortens the strands used to make it.

Curiously, the most impressive ropeway in history is far and away the Corderia della Tana at the Venetian Arsenal, stretching a whopping 3,015 meters (9,891 feet) - this despite Venetian ships being nowhere near the size of later British ships of the line, and the fact that the ropewalk in question was built in the late 1500s, when ships overall were still relatively small.

A fun little modern twist - after it underwent historic restoration, and absent its original purpose, the Corderia della Tana has been used in recent decades to house exhibits of art and architecture, which strikes me a brilliant idea.