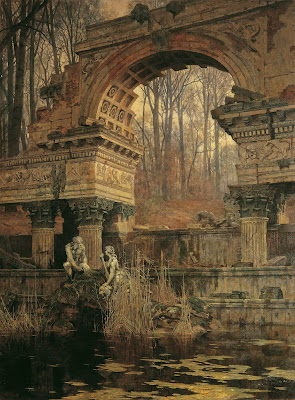 Wikipedia on the history of May Day.

British Museum post on landscape painting from around the world.

First really good historical case of a person killed by a falling meteorite.

Burial of a Bell Beaker chieftain who may also have been a shaman excavated in Britain.

Scott Alexander on the weird science surrounding gout, achievement, depression, and other things. Unfortunately he missed the historical skepticism about the connection between gout and achievement that I wrote about here.

Video of a mother leopard coaxing her cubs to cross a road in a South African national park.

Video tour of a wonderful exhibit of ancient Cycladic artifacts that was supposed to be touring museums this year. And the exhibition web site, with tons of pictures.

List of American baseball player names Japanese engineers made up for a 1994 video game.

What books are on the shelves of celebrities who have recently been doing video interviews from home? (NY Times)

Times story on efforts to ban horse-drawn carriages from cities on the grounds that they are cruel to the horses. I find it interesting that all the things they say make this work rough on horses – working hard in polluted air, lameness from standing for hours on hard pavement, the stress of crowded urban environments – also apply to people, but nobody is suggesting we ban humans from working in such conditions.
Posted by John at 8:32 AM

I always approve of practical testing in these sorts of situations. There's been way too much imaginative conjecture in archaeology for a very long time, and the recent trend toward actual experimentation carried out with the help of actual trained practitioners is long overdue and sorely needed,

Hence why I enjoyed this article so much - their metholody and conclusions seem sound. However, there's one quote from the article I found particularly jarring for its ignorance, and wish it hadn't been included.

“Use them in a clumsy way, and you’ll destroy them,” Barry Molloy, an archaeologist at University College Dublin who wasn’t involved in the study, tells Science.

Yes, bronze is relatively soft and deforms with hard usage. But the same softness that causes a bronze sword to deform with abuse also makes it relatively easy to fix. If your sword bends slightly, you can quite literally just bend it back into shape with relatively little effort by pressing it over your leg. What's more, properly handled, such a sword can even straighten itself out with further usage, due to inertia and the physics involved.

Molloy would likely have known this if he had more exposure to actual, practical testing, of course. Anyone who has actually used a bronze sword with decent technique could have told him how off the mark he is. Pity this armchair conjecturer who had absolutely nothing to with the study in question didn't think to ask, and felt he had any business commenting on the subject. (And pity the journalists didn't know better than to listen to him!)

Hoo boy, that's a doozy of a typo. I swear I read through my posts to double check for mistakes! I just somehow always miss SOMETHING regardless! (Usually several small somethings, but uh... wow... this one was bad.)