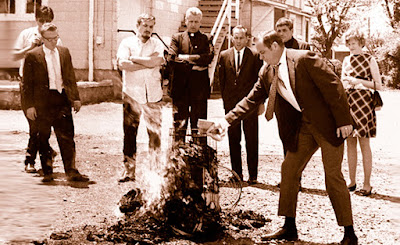 Fifty years ago today, on May 17, 1968, something happened in Catonsville.


The Catonsville Nine were nine Catholic activists who burned draft files to protest the Vietnam War. On May 17, 1968, they went to the draft board in Catonsville, Maryland, took 378 draft files, brought them to the parking lot in wire baskets, dumped them out, poured over them home-made napalm (an incendiary used extensively by the US military in Vietnam), and set them on fire. Then they sang, prayed, spoke with reporters and waited to be arrested by the Baltimore County police.

They were tried in Federal Court in Baltimore on October 5-9, 1968. Both pro- and anti-war demonstrators picketed outside the courtroom. They were found guilty of destruction of U.S. property, destruction of Selective Service files, and interference with the Selective Service Act and sentenced to a total of 18 years in prison. But their leader Father Berrigan went on the lam and for the next seven months kept showing up in various places around the country, preaching anti-war sermons, and then disappearing again. He was eventually arrested and served a year in prison.

The building that housed the draft office still stands next to our public library; my daughters took ballet lessons there. I remember the strange thrill I got when I realized that those events took place in the parking lot where I left my car every Saturday.


Our apologies, good friends, for the fracture of good order, the burning of paper instead of children, the angering of the orderlies in the front parlor of the charnel house. We could not, so help us God, do otherwise.

I wonder if this actually accomplished anything, or was simply a symbolic gesture.

By 1968, we'd already had actual combat units being deployed in Vietnam for three years. In fact, that year is more notable for being the zenith of our involvement, when we had the greatest number of troops invested. It was only after the Tet Offensive of that year revealed to the average person just how bady we were being beaten, and just how much the government had been lying to the nation about the war's progress, that we began the process of withdrawing.

So I have to wonder if the actual files burned contained any meaningful information, and whether their destruction actually hindered or prevented anyone being drafted. Were there backups? Were these perhaps the files of men who had already been deployed overseas and were already part of the military, still kept on record? Or perhaps they were records for yet undrafted individuals, but that point was moot because public opinion was turning against the war anyway, and no new troops would be sent to Vietnam?