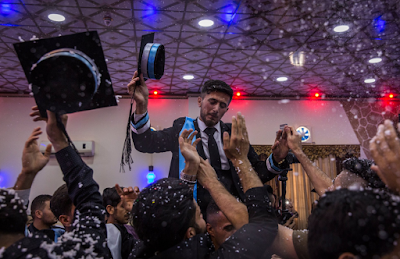 Much of the old city remains a shattered wasteland, but the rest of Mosul is returning to normal with zest:


Less than a year ago, Mosul emerged from the nearly nine-month battle to retake it from the Islamic State group.

Now, in many parts of the city, life is returning and the feeling of security is palpable. New businesses are open and people stay out late into the evening for the first time in years. There is a sense among people here that at last Mosul is unshackled from criminal gangs and hard-core Islamic factions. . . .

Just a few minutes’ drive away, Mosul University is also bringing life and energy back to the war-ravaged city.

The young minds needed to rebuild a country so fractured and destroyed are coming back in force to attend classes at the prestigious institution, which was heavily damaged during the fighting.

Some of the first students to graduate since the defeat of ISIS celebrated wildly recently at a reception hall in eastern Mosul. With extended families in attendance, each graduate was paraded through the party under a shower of exploding glitter and booming Iraqi pop music.

One thing I love about our species is the way we bounce back after tragedies that might destroy us.
Posted by John at 7:32 AM