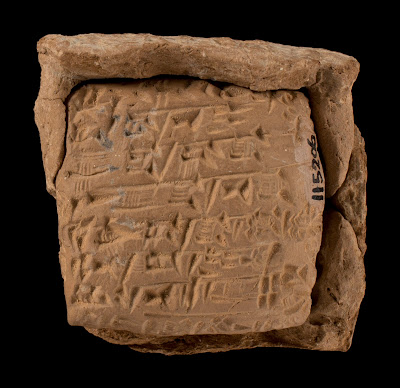 The amazing library of clay tablets from the Assyrian merchant colony at Kanesh in Turkey continues to yield new wonders. About 23,000 tablets have been recovered, dating to about 1950 to 1800 BCE. These were ordinary business documents:


The introduction formula is kept to a minimum, ‘from so-and-so to so-and-so say this’, then comes the message in the first person. The message typically contains instructions from one merchant to his trading partner about the forthcoming shipment: the types and quantities of goods, their unit price and the applicable exchange rates, practical arrangements for the caravan and its staff in terms of accommodation and subsistence, even including the fodder for the donkeys.

Researchers at the British Museum have focused in on one group that describes a different side of trade:


Let them [the transporters] bring the tin via the narrow track if it is clear. If not, let them make small packets of my tin and introduce them gradually into Kanesh, concealed in their underwear.

The phrase "narrow track" appears regularly, and from the context it becomes clear that it describes, not some particular road, but the enterprise of smuggling:


Thanks to the letters they wrote, we know of some of the taxes Old Assyrian merchants were supposed to pay: transport and import taxes upon arrival in Kanesh, tolls and duties on goods and persons en route and an export tax upon departure from Ashur.

Where there is a will there is a way, and for smugglers this was the ‘narrow track’. Going through the mountainous paths of Anatolia, merchants got around some of the taxes by taking a detour away from authorised routes and checkpoints. Lacking the protection offered on official routes, the journey was more perilous, exposed to wild beasts, highway thieves and a harsh climate.

Smuggling also meant fooling the customs system either by not declaring taxable goods or by making a partial declaration. Along with the underwear trick elaborated by Buzazu, the merchants’ letters describe various ruses, whether that meant paying off the guards or hiring mules among the locals who would have known the place inside out.

Fascinating, the things that have endured for 4,000 years.
Posted by John at 6:21 PM