A Wonky Comment on Lead in the Ice Core

All the media that pay attention to such things (NY Times, Science News) are covering some results from measuring the amount of lead in an ice core from Greenland, which the study's authors say traces out the history of lead production in the ancient world. They think they can see in this data several major historical events, such as the civil wars of the late Roman Republic and the crisis of AD 250-270. This is pretty cool science; I love the basic idea of studying ancient industrial production by measuring the residue of pollution. But there is something wrong with this study.

First, look how spiky their graph is. A certain amount of random variation is inevitable in any series like this, but why would samples from some years have ten times as much lead as the years before or after? Industrial production in the Mediterranean cannot explain this. So there is another variable at work. 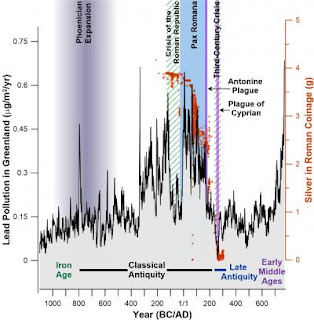 Also, a simplified version of the graph shows that it traces the rise and fall of the Roman economy fairly nicely. But what is happening at the far right end? Granted the European economy might have improved under Charlemagne, but it did not get back to the level of AD 100. Not even close. This seriously raised my hackles and made me wonder what the heck is going on. 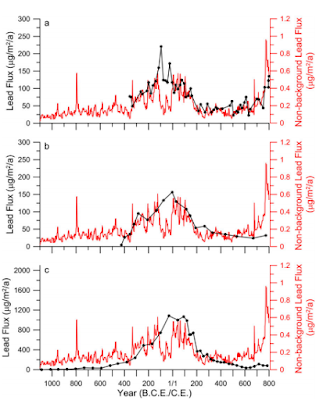 Fortunately the authors of the study provided us with an important clue in their Supplementary Material. On these three graphs the simplified ice core data is shown in red. The black line is data from three studies of lead in bog sediments. Notice that all three show the Classical expansion, but only the one at the top shows dramatic growth after 650 AD. That sample is from Flanders Moss in northern Scotland.

Aha! So the missing factor here is wind patterns. The graph we see from the ice core is a combination of at least two variables: how much lead the Romans were pumping into the air, and whether the wind was blowing toward Greenland. Lead concentrations rise in the Carolingian period not because of increased production but because the wind shifted and blew more often toward the North Atlantic. Of course there might be yet more variables, such as changes in refining techniques, or the seasonality of smelting work, or the location of active mines. But anyway there are at least two.

Notice that the bottom bog sample has much higher lead levels than the other two; as you might guess, that bog is in Spain, the epicenter of Rome's metal industries. And it traces out a graph that more closely matches my idea of lead production in the Mediterranean than the ice core graph does. Probably cost about 1% as much, too.

I don't want to seem too negative; the ice cores are a great resource and we should push them as hard as we can. But they don't reveal everything, and sometimes they can be misleading. I understand that a couple of well attested volcanic eruptions do not appear in the ice core data, presumably because weird wind patterns kept any detectable amount of their ash from reaching Greenland. In the case of lead from Classical and Medieval times ice core data clearly should not be used alone, but only in combination with other information. And people who publish about it should be a lot more circumspect and do less grandiose self-promotion; their data is nice but not as good as data from bogs produced by people nobody has ever heard of, whose results completely failed to make it into the news.
Posted by John at 9:15 AM

Fascinating stuff. I wonder, how do we know the source of the lead in the Greenland cores? Would it be possible for that lead to be from somewhere other than the Mediterranean? What about East Asia? The Middle East? Ninth-century Iraq was positively booming.

Interesting about the Spanish results. If lead tracks prosperity, I would expect a ninth-century rise, reflecting the reputed prosperity of the Umayyad emirate. Or perhaps the Spanish mines had simply played out? Perhaps Muslims didn't have much use for lead? What did the Romans use lead for (aside from, famously, lining their pipes with it, if they really did that)?

Do you have access to PNAS? If anybody can get me a copy of the whole article I'll read it and see if it says anything useful.

A quick search for "Roman lead" shows I have other articles on this topic, based on lead from human bones and earlier ice cores. I found the statement that western Europe used much more lead than China, but no good source for that assertion. Under "Roman Economy" wikipedia has a dramatic graph on lead production.

I may have access to PNAS through my school, but I won't be able to find out until next week.