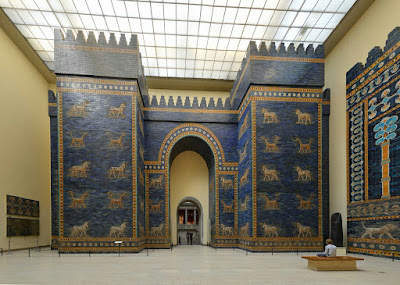 Behold the famous Ishtar Gate from Babylon, built by Nebuchadnezzar II (reigned 605-562 BC) and reconstructed in Berlin's Pergamon Museum. If you're like me, you may have wondered how authentic this is. Because, let me tell you, nothing comes out of the ground looking like this. 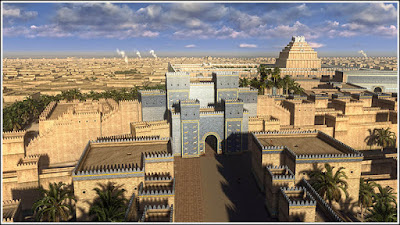 Incidentally that is actually just the front part of the gate; the back part was too big to ship to Berlin. 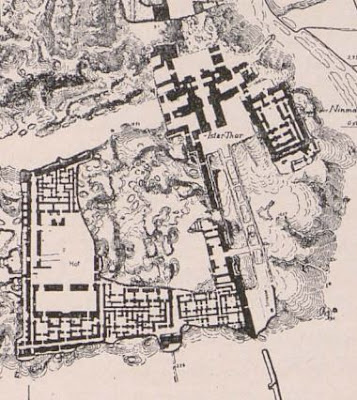 Babylon was excavated from 1900 to 1917 under the direction of Robert Koldewey of the German Oriental Society. In 1912 Koldewey wrote a book about his work so far, which was translated into English and is now free to everybody at Archive.org. I read the whole thing, and my post on the overall story of the Babylon excavations is here. 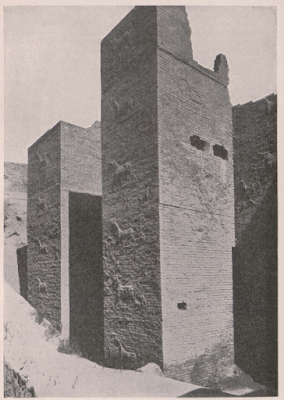 While I was reading Koldewey's book I paid particular attention to the account of the Ishtar Gate, which gets a whole chapter, with another for the processional way that led to it. That was actually the place where Koldewey began his excavations, and it was fragments of blue enameled brick he found on the surface that made him particularly want to dig in Babylon. I discovered that while, of course, the whole thing did not emerge from the ground intact, quite a lot of it did. 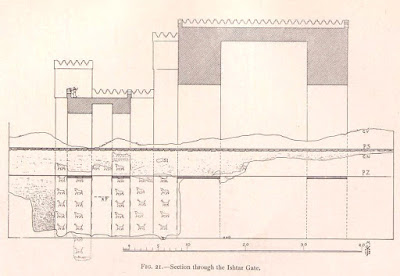 Koldewey's section through the gate. As is often the case with archaeology, we have a very clear idea of the shape of the foundation, and in this case this walls have been preserved to a remarkable height.

But that still doesn't get us to the top; how did Koldewey know what the tops of the walls and towers looked like? So far as I can tell, he did not. Archaeologists can often guess at the height of walls from the amount of rubble, but at Babylon the upper layers had been mined for bricks for 2,000 years, so that would not be very reliable. And sometimes you can tell a lot about a building from particular cut stones or shaped bricks, but that does not seem to be the case at Babylon, where the bricks were all made to standard shapes and sizes. 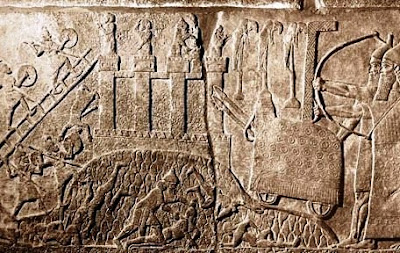 There are Assyrian reliefs that show Mesopotamian city walls, and some of them look like the walls that Koldewey gave to Babylon, so maybe he got the idea from these. I suppose it is also possible that in the mass of rubble that surrounded the gate there were big chunks of still-mortared brick forming at least one of the crenellations, but if so Koldewey doesn't mention it. (Nebuchadnezzar's masons used a sort of asphalt for their mortar, made with tar that oozed out of the ground over what are now famous oil fields.) Come to think of it, Babylon had miles of walls, so it would not be at all surprising if such a chunk survived somewhere. Perhaps the answer is buried somewhere in Koldewey's final excavation report. 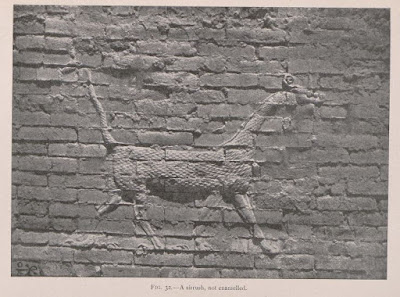 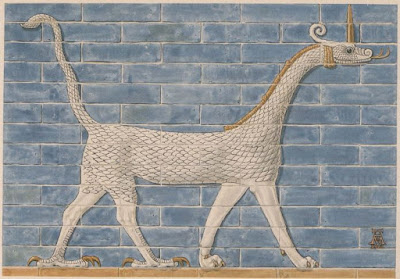 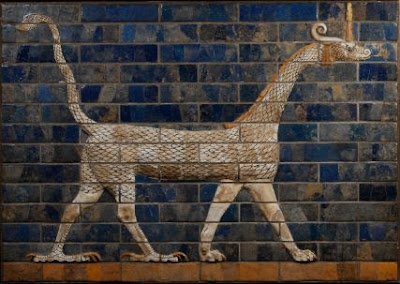 Koldewey did learn in great detail about the sculptures of the gate and the processional way that led up to it, and in fact he found dozens of nearly complete versions. This is a Sirrush, a "walking serpent," the beast sacred to Marduk; excavation photo, drawing from Koldewey's book, and as displayed in Berlin. 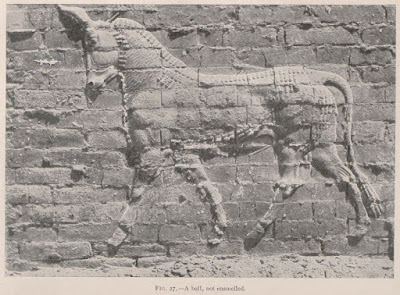 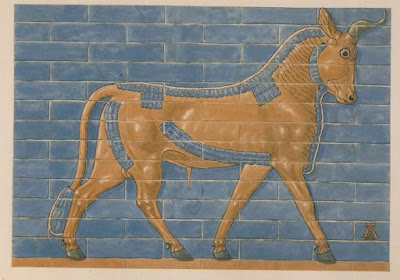 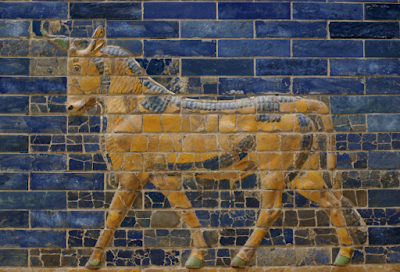 Bulls. Notice that these are made of molded bricks, so that all are identical, or at least all the ones walking in the same direction. Koldewey thought that each started with a sculpted original, and the molds for the bricks were made by pressing clay against it. That would be a tricky process, but given that Nebuchadnezzar II built like a madman through his whole long reign, almost all in brick, the brickmakers of his time were probably as expert as any before or since.

And one of the lions from the processional way.

So the reconstructed gate is 90% original about halfway up. Above that it may be largely imaginary, although it is built of original Babylon bricks. The wonderful sculpted animals are as real as anything you see in a museum. I come to the end of this exploration of Babylon feeling reassured more than worried; Koldewey and his crew did an amazing job, and the maps on which all our reconstructions of Babylon are based are as good as it gets. The tops of the buildings are a lot less certain than the bottoms, but that is just always the case in archaeology.
Posted by John at 7:41 AM

"I suppose it is also possible that in the mass of rubble that surrounded the gate there were big chunks of still-mortared brick forming at least one of the crenellations, but if so Koldewey doesn't mention it."

This is arguably a bit pedantic or overly technical, but strictly speaking you can't actually have crenellations / crenels formed by anything - they're the negative space "cut out" from the surrounding material. If you have big chunks of still-mortared brick, what they may have formed is one of the "merlons".

If you build a wall extending upward from the edge of a roof, terrace, balcony, or similar, that's a "parapet". Not all parapets are meant for battle - many are functional railings or decorations. You can "embattle" a parapet and turn it into a "battlement". You do this by "crenellating" it, introducing gaps called "crenels" into the design. The portions of the battlement between the gaps become "merlons". (And if you add cannons to the design, the crenels become embrasures.)

Nice and complicated, yeah? Clear as mud, as intuitive as quantum mechanics.