Why Texas is the Wind Power Leader 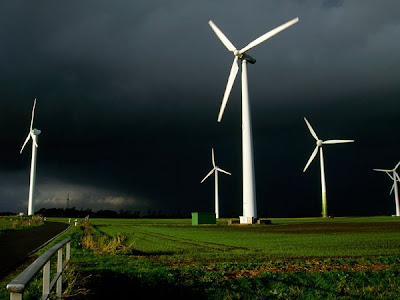 Progressives find it hard to admit that Texas does anything right, but since Texas is the national leader in wind power technology, perhaps we should ask how they have achieved this. Right now Texas gets about 5% of its electricity from wind power, a figure that has risen to over 20% on hot, windy days.

First, the state government required it; no free market fundamentalism here. This provision was added to the state's energy plans by an alliance of environmentalists and ranchers, who saw this as a way to make more money from their vast, windy spreads. You gotta love the way "tough, independent" western ranchers are always out to legislate on their own behalf.

Second, they made a massive investment in new high voltage power lines, running from Houston and Dallas to the Panhandle and other empty, windy areas.

Third, to the extant that they could they ran roughshod over local objections to wind farms and power lines. I gather the Texas state government is good at ignoring objections to its own actions.

Fourth, because most of Texas is cut off from the national power grid, the Texas government found it easier to make their own rules for the grid than other states. For reasons I don't fully understand, wind power feeds into the grid differently than other kinds of power, so it takes adjustments to how the grid works to draw more than a small amount of power from wind turbines. To adjust how the two main national grids work will require input from all the states, the Feds, and hundreds of power providers.
Posted by John at 1:19 PM