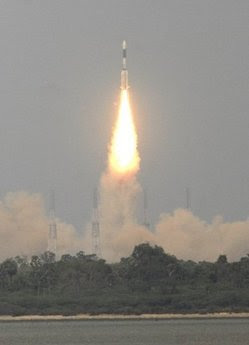 I just discovered today that India has a human spaceflight program. According to what I can find, they plan to launch an entirely Indian-made capsule to low earth orbit by 2015, carrying a two-person crew. The projected cost, in current dollars, is around $3 billion. They are probably facing delays or cost overruns now, though, since their first attempt to launch a "cryogenic" (using cold liquid fuel) booster just failed (above). India has been working on this technology since 1992, since the US refused to sell it to them and persuaded Russia not to sell it, either.

But why? Satellites, as it turns out, are very useful, and I can see why India's great power ambitions would include a way to launch their own satellites. Sending people into space, on the other hand, is absolutely useless and very expensive. Surely a nation with a hundred million hungry people could think of a better way to spend the money.

Pride is the only reason. The Russians did it, the Americans did it, the Chinese did it, so the Indians (some of them, anyway) feel like they have to do it, too. I find this exasperating. It's like that old parent-teenager conundrum, "if your friends jumped off a cliff, would you do that, too?" Great powers waste billions on human space flight, so anybody who wants to be a great power has to waste billions on human space flight.

In the beginning it was kind of amazing, but I think human space flight since the moon landings has been a big zero. If India wants to throw its own fortune into the great sinkhole, I suppose that is their right, but that doesn't make it a good idea. The best they can do is to be the fourth nation to send people into space, using 40-year-old technology, and where is the wonder or the glory in that?
Posted by John at 2:34 PM