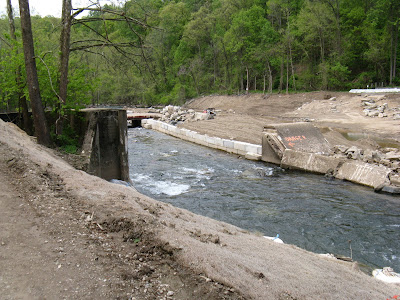 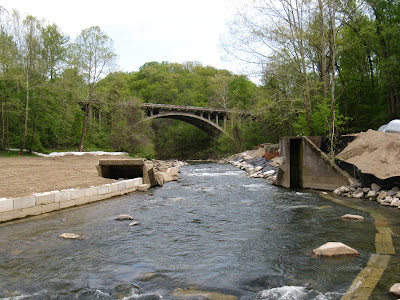 There is a path that enters Patapsco State Park a block from our house. Followed a certain way, it leads down to the river, next to an old concrete dam. I was rather startled, when I went down there for the first time this year, to discover a major demolition operation under way.

The Patapsco River flows south down the west side of Baltimore, through a steep valley, before turning east to flow into the harbor. In the 19th century this was a major industrial area, with more than a dozen large factories powered by the river. Now the factories are all closed, and most of the buildings are either gone or converted to condominiums. The land along the river is mostly state park. But the river is still blocked by five major dams and numerous lesser obstructions. The state, along with a bunch of environmental organizations, has wanted for years to remove the dams so the river can flow freely. This would restore the annual runs of shad and herring that were a significant industry in colonial times, and turn the river into a major destination for canoeing and kayaking.

Alas, removing dams is expensive. But when the recession came and the Obama administration announced they wanted part of the stimulus package to be spent on environmental cleanup, the Maryland Department of Natural Resources was ready with plans to take down two of the dams. Union Dam, the one near my house, is (as you can see) almost gone, and Simkins Dam a mile downstream is slated for removal soon. That would leave one dam lower down the river, Bloede Dam, which is bigger and more modern than the others, and then two more further upstream.
Posted by John at 7:47 AM