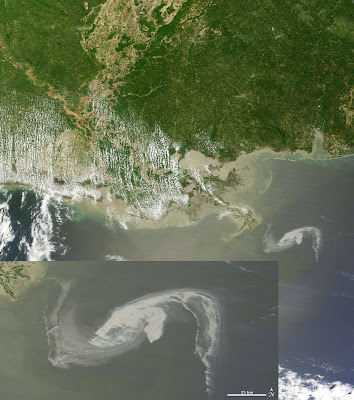 The oil slick from the offshore rig that blew up in the Gulf of Mexico last week has reached land, and oil is starting to wash up in the marshes. This could be a major catastrophe.

Before you start blaming British Petroleum or the government or the Obama administration for allowing bidding on new offshore oil leases, just stop. So far as we know, this rig was no worse run than any other. By and large, the system that bring oil from wells to our cars is remarkably clean; only a tiny percentage escapes.

But no system is perfect. Leaks are inevitable, somewhere, sometime. We, and regulators, need to be vigilant, and perhaps we should keep drilling out of the most sensitive areas. But as long as we keep using oil, spills are inevitable.

The only way to reduce them is to reduce the amount of oil we use. Concerned about oil spills? Drive less. Take the train. Support the construction of nuclear power plants, and offshore wind farms, and new long-distance power lines. Do things and support things that will move us toward alternative energy. Don't bother looking for someone to blame, because everyone who uses oil is partly at fault.
Posted by John at 5:48 PM