In the Beech Woods 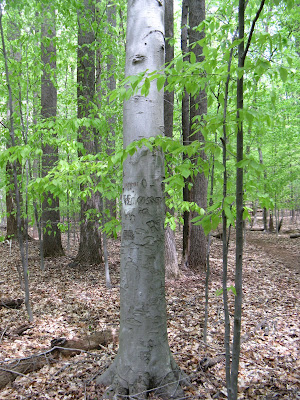 Some years ago, when I was studying the history of the Prince William Forest Park in northern Virginia, I counted up all the trees mentioned in colonial property deeds for the area. About 80 percent of them were oaks of one kind or another, and another 10 percent were hickories. Which is what one would expect, after all, botanists call the climax forest in this part of the world the "oak-hickory forest." But as I explored the forest growing in the park now, I noticed that the most common trees were smooth-barked beeches . The same is true of the forest in the state park behind my house, where most of the trees seem to be either beeches (above) or tulip poplars like the great tree below. There are only a few oaks, and all of them seem to be more than 40 years old; almost all of the young trees are beeches. 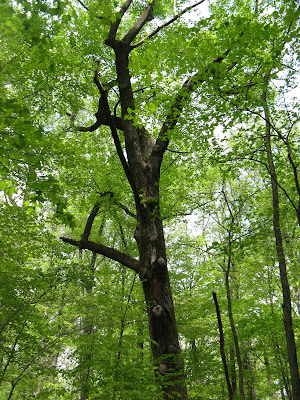 For years I have wondered, in an idle way, why the modern forest is so different from the forest of AD 1700. On Tuesday I spoke at a National Park Service conference called the "Spotlight on Resources," where people who have been doing research for the NPS give brief, non-technical presentations of their results to an audience of NPS executives and managers. One of the speakers has been studying carbon storage in the Prince William Forest Park, and his slides included lots of graphs of tree species abundance and the like. His results confirmed my impression that oaks are in decline, and beeches are ascendant. So I thought, now is my chance to ask my question to someone who will know the answer! As soon as the morning session was over I grabbed him and said, "Why is the composition of the forest changing?" He said, "Well, we don't really know."

From talking to him and another botanist I learned that there are theories about why this is happening. One concerns fires. The Indians burned the forest regularly, in the course of hunting and because it encourages the trees they wanted more of, such as hickories and black walnuts. It may be that fires encourage oaks and discourage beeches, so that modern fire control is changing the forest. This raises the question of how "natural" the oak-hickory forest is, since the Indians burned the forest on a regular basis for 5000 years.

The other theory concerns deer. There were several talks and posters about deer at the conference, and one of the speakers said there are now ten to fifteen times as many deer in our region as there were in prehistoric times. Deer, it seems, would rather eat oak seedlings than beech seedlings, and studies have shown that more oak trees sprout in plots that have been fenced to keep deer out. This makes sense, but on the other hand I am a little suspicious of all the deer talk. The excess of deer seems to be the fall back explanation for every biological change right now -- at least, every biological change that can't be pinned on global warming. But whatever the reason, deer, fires, warming, or something else, the forest is changing before our eyes.
Posted by John at 1:44 PM