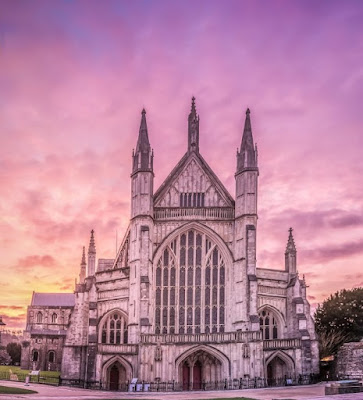 Winchester in southern England is one of the living cathedrals, evolving organically over the centuries, a 1380-year history of gradual transformation. 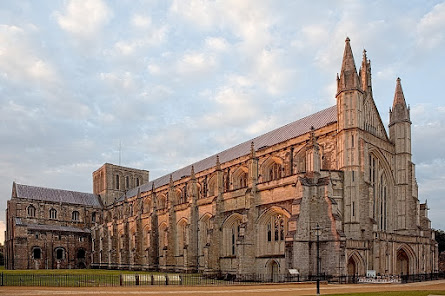 Winchester was the ancient seat of the Kings of Wessex and their traditional burial place; the first cathedral here was consecrated in 642. Because the kings of Wessex were rich, pious, and spent a lot of time fighting against pagan Vikings – a struggle in which they thought the favor of God would be very useful – they gave lavishly to Winchester, making it England's richest church. Until the Reformation the Bishop of Winchester actually had more money than his boss, the Archbishop of Canterbury. 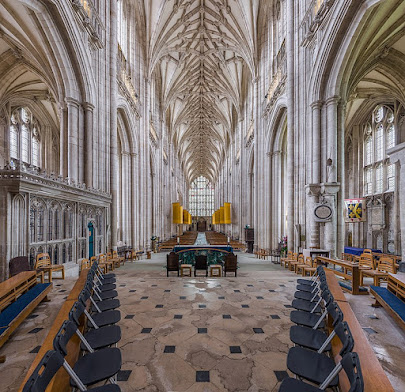 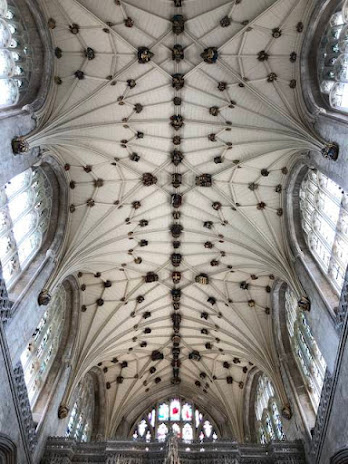 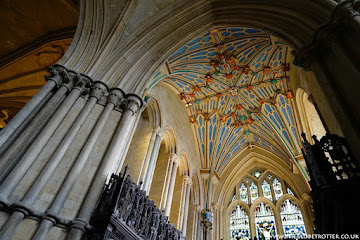 Construction of the New Minster, as it was called, began in 1079, and it was consecrated in 1093. No sooner was that finished than other bishops began rebuilding it as something more up to date; its transformation to the Gothic was mostly completed in the mid 1300s, but more kept being added down to 1525. 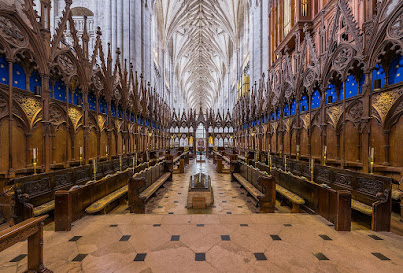 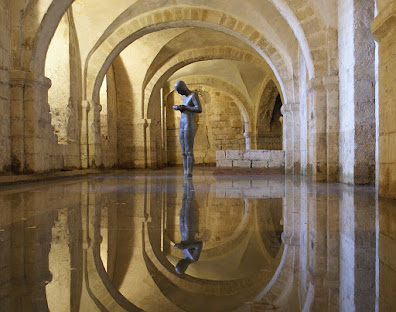 The crypt, now flooded. Among the people buried at Winchester are St. Swithun, four Kings of Wessex, going back to 643 AD; four kings of England, including Canute, Ethelred II, and William Rufus; Izaak Walton, author of The Compleat Angler, and Jane Austen. This statue is by Antony Gormley, one of the many 20th-century additions to the complex. 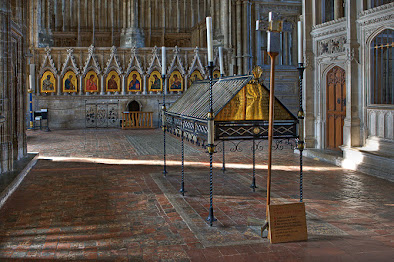 Shrine of St. Swithun. The original was destroyed during the Reformation, and I think this is 19th century. 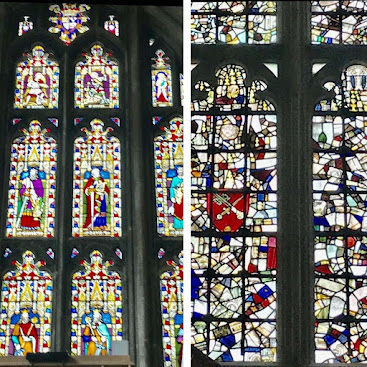 Speaking of the Reformation, the windows have a fascinating story. As you can see in the left panel, some of the late medieval windows survive. But others were smashed during the Civil War of the 1640s. Some pious people gathered up and saved all the fragments of window glass they could find. After the Restoration, the new bishop considered these fragments, thought it was wonderful that they had been preserved, but on the other hand realized it was impossible to reconstruct the windows as they had been. So the glass was used to fill two large windows in an almost random way. 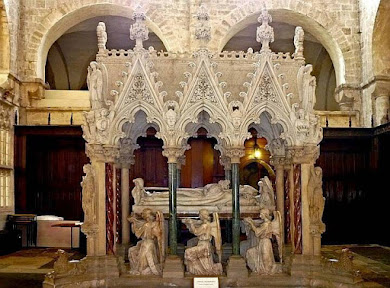 Tomb of William Wilberforce, usually heard of today because of his opposition to Darwin; he was the one who asked Thomas Huxley if it was through his grandfather or his grandmother that he was descended from an ape. But he was better known in his own time as a vehement opponent of slavery. 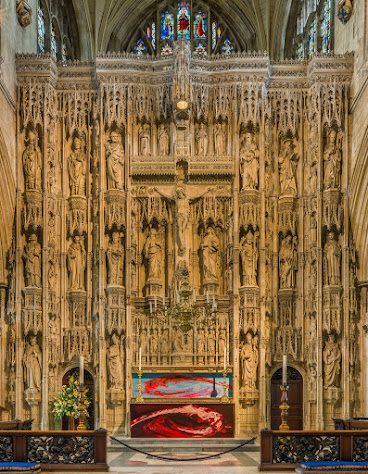 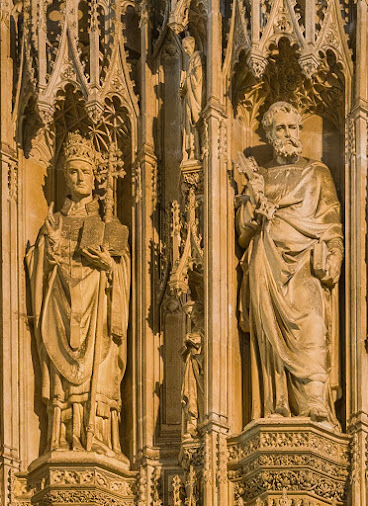 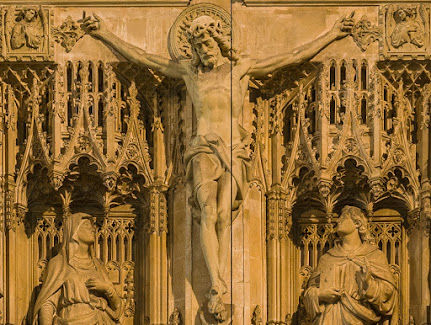 The amazing choir screen. The late medieval version fell into decay and replaced in 1637-1640 by Inigo Jones, a noted neoclassical architect. This was later felt to be inappropriate in a Gothic church, so in the 1870s it was moved and this one was installed by George Gilbert Scott, a noted neo-gothic architect. 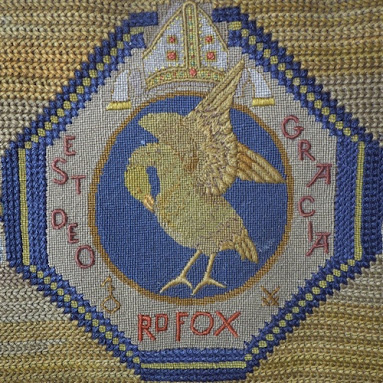 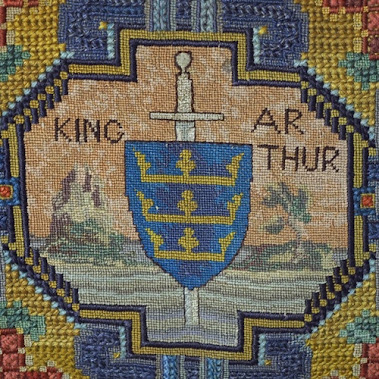 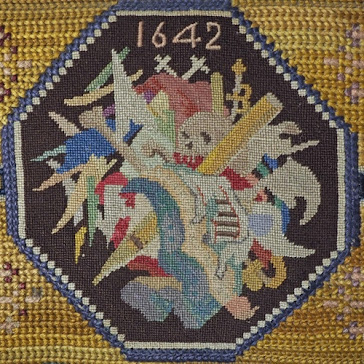 In 1931 the bishop asked Louisa Pesel to embroider some cushions for his residence, and they were such a hit that she was given a much larger commission to create cushions for the worshippers to kneel on. These are now among the most beloved objects in the cathedral. 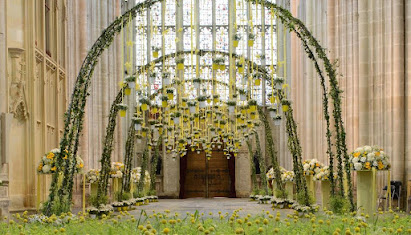 And the cathedral's patronage continues, with works like this floral display by Angela Turner for a recent Winchester flower show. 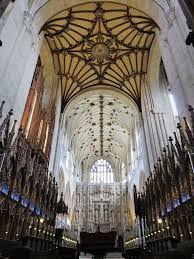 "Tomb of William Wilberforce, usually heard of today because of his opposition to Darwin; he was the one who asked Thomas Huxley if it was through his grandfather or his grandmother that he was descended from an ape. But he was better known in his own time as a vehement opponent of slavery."

This feels like you are suggesting that Wilberforce deserves to be better remembered despite his anti-evolutionary failings because he was (laudably) anti-slavery, which perhaps balances things out somewhat. But that seems odd given that both Darwin and Huxley were equally against slavery.

Wisdom and foresight in one arena doesn't always counteract obstinence and pigheadedness in another. Wilberforce deserves some credit for his objections to slavery, but he still made a historically famous fool of himself with his objections to evolutionary theory. His was a religious mind, and the same faith-based thinking that led him to condemn slavery also led him to embrace speciesism. He unfortunately had the humility to not see himself as better than other humans, but the arrogance to insist he was better than other animals.