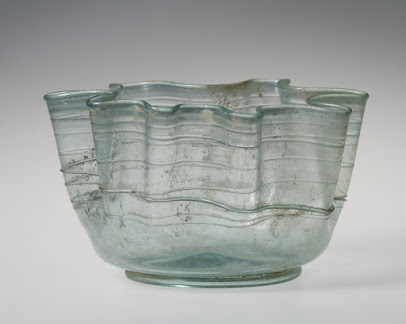 Glass is an ancient technology, developed in the late Bronze Age in either Egypt or Syria. But once developed it remained very conservative for a thousand years, the same vessel forms in the same dark colors. The first major advance was the invention of glass blowing, probably around 100 BC, probably in Syria. Not long after that, glass-makers discovered that by adding Manganese Oxide they could make the product much more transparent, leading to a centuries-long struggle to produce truly clear glass. So the Roman Empire saw a great flowering of glass-making, with new colors, forms, techniques, and more. 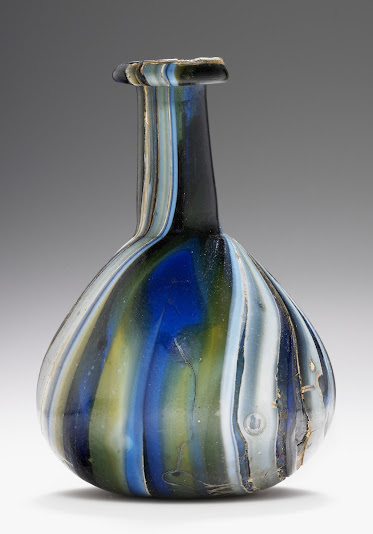 The Getty has several of the most famous ancient glass pieces. Of this one they say:

The glassworker fused together glass canes in multiple colors to form a single gob. Inflating the gob resulted in vertical bands of alternating dark blue, purple, green, and white. If you look closely you’ll see the fluid gradations within each band of color—for example, a large band transitions from pure white into icy blue and then stormy blue as it begins to mix gradually with the adjacent dark blue glass. The effect is almost hypnotizing. 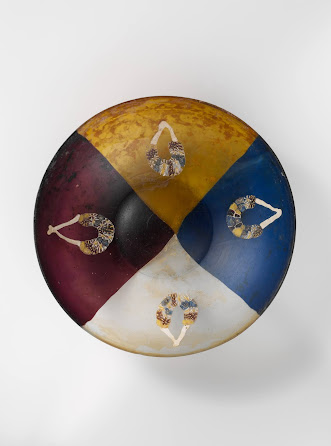 Another Getty piece, a multi-sectioned bowl:

Like the color-band flask above, this bowl has alternating bands of color, but here a different technique achieved the striped effect. To make this bowl, the glassworker wound a trail of hot white glass around a purple glass gob. Marvering it (rolling it against a slab) fused the trail into the gob to create a smooth surface. After marvering, the glassworker partially inflated the gob into a one-part open mold, called a dip mold, whose interior had been carved to imprint the vertical ribs around the vessel’s body. The partially inflated gob was removed from the mold and fully inflated. 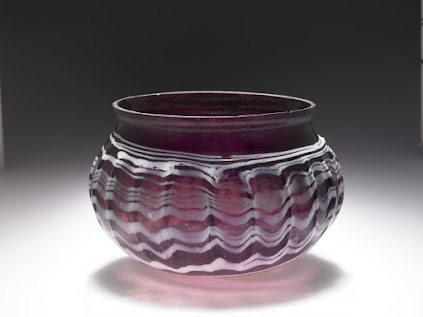 Notice the experimentation with different combinations of fusing different colored pieces, blowing, molding, painting, and more. As in this ribbed bowl, which was partially blown before the white piping was added, and then finished by being blown into a four-piece mod. 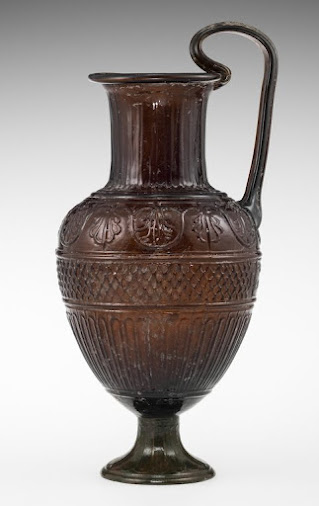 We even know the names of a few of Rome's most famous glass-makers; this piece is signed by Ennion, That's a Semitic name, so he was probably from Syria. 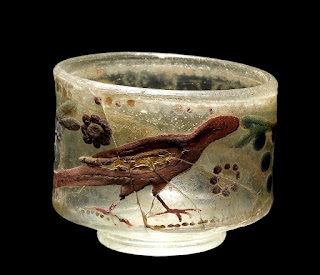 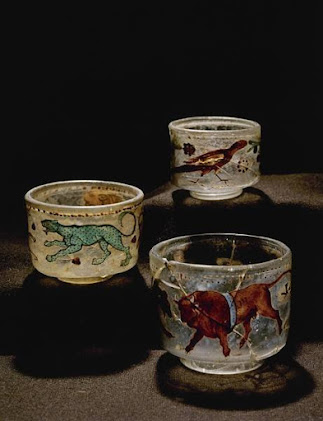 Painted "circus cups" found in a queen's grave in Denmark, 3rd century AD. Glass was an important Roman export, sold not only to barbarians but also to Persia and India. 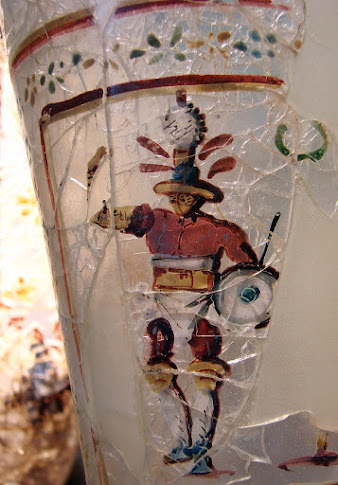 Here's a Roman vessel from the 2nd century AD found in Afghanistan. The painting shows a gladiator. 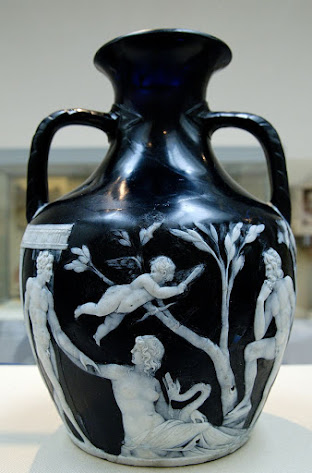 Late in the first century BC another major invention was made, cameo glass, which was made by fusing lumps of white glass to a dark vessel and then carving the white glass into the finished shape. This is the famous Portland Vase, which in the 1700s was widely considered one of the most perfect works of classical art. 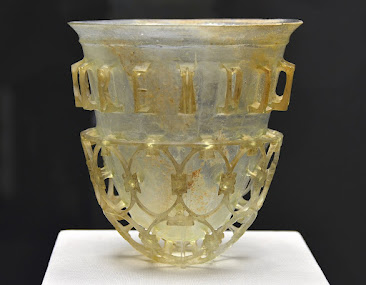 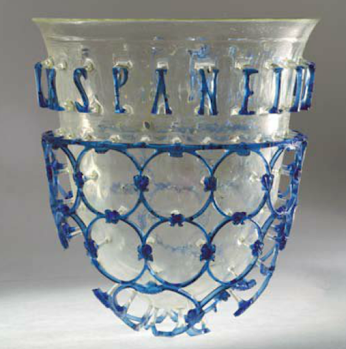 Many ancient technologies and art forms stagnated long before the classical world ended. But not glass; new glass forms were created right up until the fall of Rome and beyond. The "cage cup" was introduced in the 4th century AD. 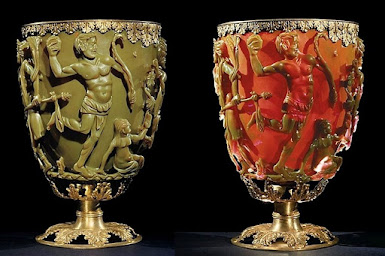 Glass makers also learned that my mixing tiny particles of gold or silver into the mix they could create glass that takes different colors in different lights. This is the most famous example, the 4th century Lycurgus Cup. 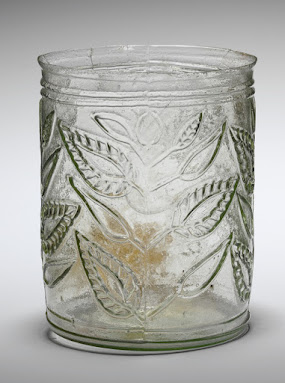 Of course adding gold could only be done for the luxury market. But Roman glass makers got so good at making nearly clear glass that vessels like this cup could be mold blown by the thousands and sold to small merchants and the like. One outgrowth of this expertise in making clear, inexpensive glass was the first glass windows. We know the Romans had glass windows, but experts disagree vehemently about how many and how widespread the practice was; certainly window glass was nothing like as common as it would become in the later Middle Ages. 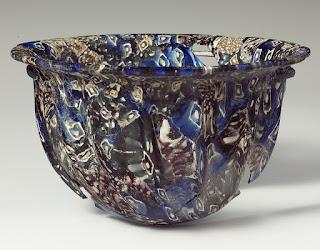 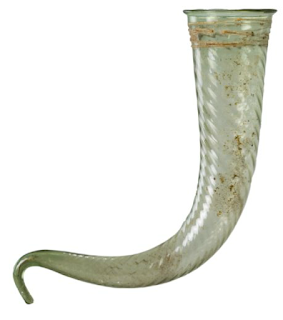 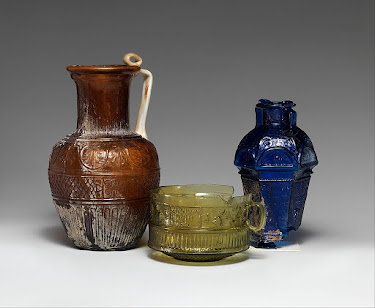 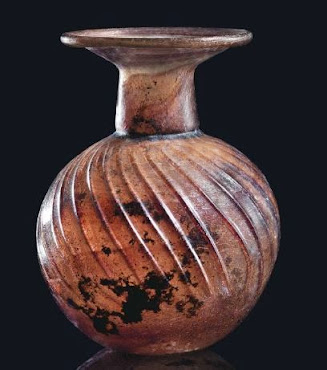 The variety of Roman glass is stunning, as is the number of vessels that survive.
Posted by John at 9:13 PM