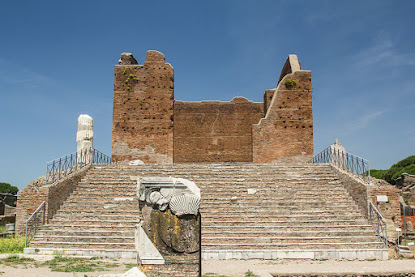 Ostia Antica was once the port of Rome. Its name comes from Os, mouth, since it sat by the mouth of the Tiber River. 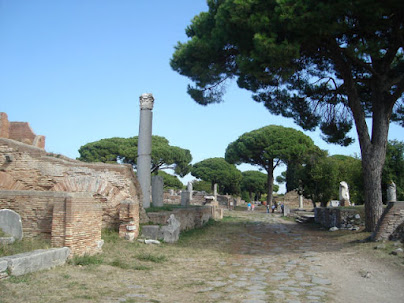 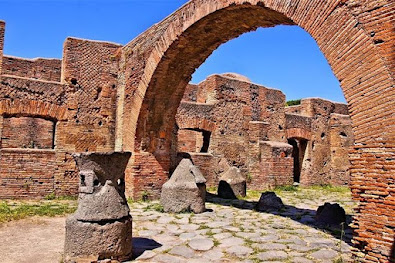 The Romans believed it was their first colony, founded by Ancus Marcius, the fourth king of Rome. That would have been around 600 BC by our count. Archaeologists have so far not found anything that conclusively dates to before 400 BC, but there isn't any reason to doubt the Roman tradition; the founding of colonies was something the ancients kept pretty careful track of. 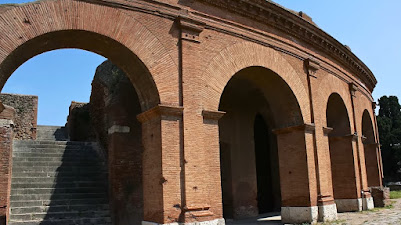 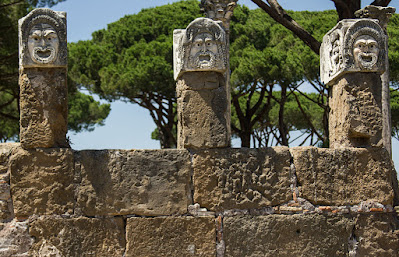 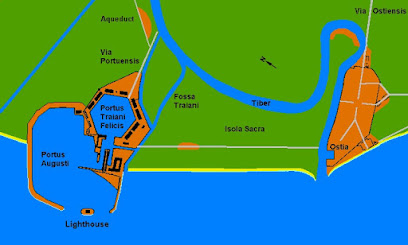 But Ostia's harbor was never a big or deep enough harbor to serve the capital well, and it cost as much to get grain from Ostia to Rome as to get it from Egypt to Ostia. So emperors beginning with Claudius constructed a new port on the other side of the river, called by the blindingly original name Portus. After Trajan completed a vast new harbor and canal at Portus, around AD 103, Ostia began to decline. 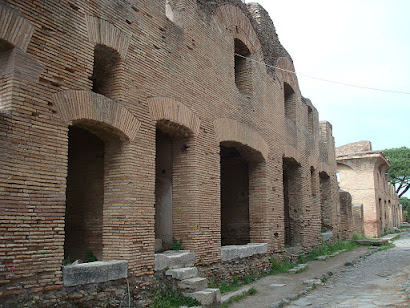 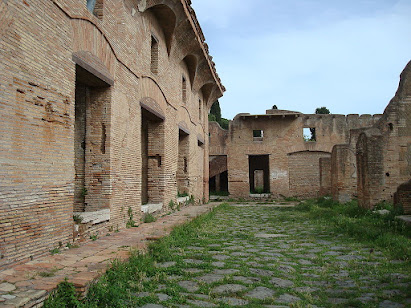 Some neighborhoods of tenements that had been occupied by port workers were leveled, and seaside villas for Rome's elite were built over them. Here are some surviving tenement blocks, or insulae as the Romans called them. 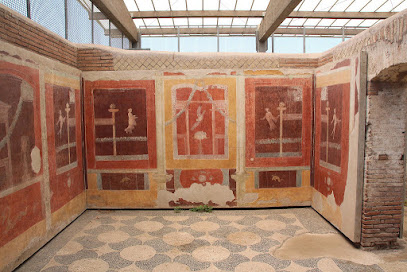 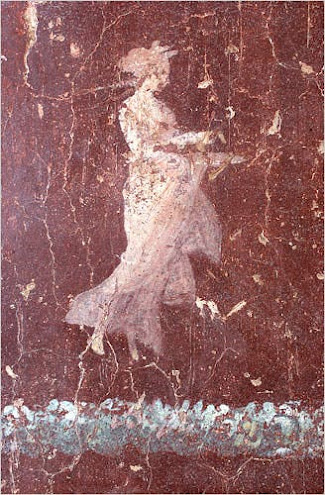 Some of the new villas contain preserved frescoes that are the second most spectacular remnants of Roman painting; of course that still leaves them a long way behind Pompeii. 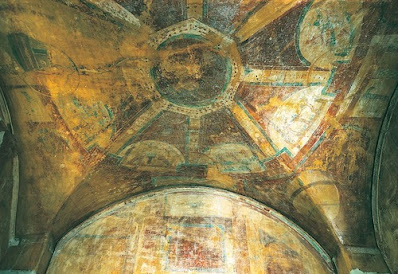 House of the Painted Vaults 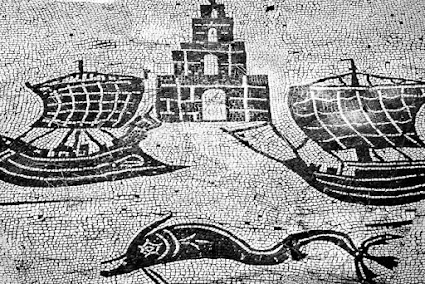 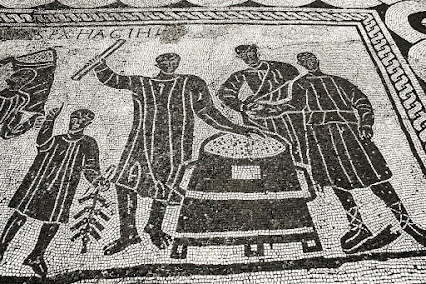 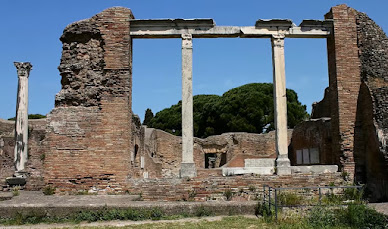 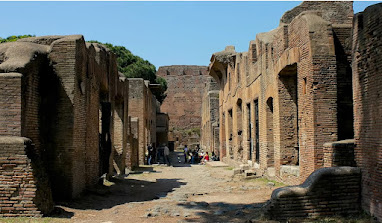 Ostia shrank along with Rome, and by AD 700 it was a shadow of its former self. In the 700s it was the target of frequent attacks by Saracen pirates. After the 849 Battle of Ostia between Saracens and Christians the site was abandoned and the residents, led by their bishop, packed up and moved to a safer spot on a hill several miles inland. 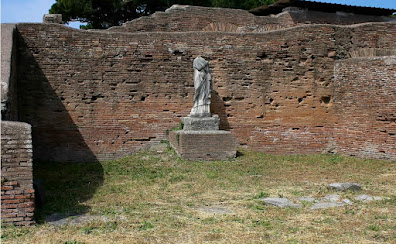 And then, somehow, it got buried. No source I can find says how, but given that some of these walls are preserved to a height of more than 20 feet (6 meters), a lot of dirt was involved. I'm going to guess that this was alluvium from the Tiber, but I really have no idea. (Can someone elucidate the taphonomic processes at work here for me?) Did maybe this stretch of the coast subside, like some areas around Naples? 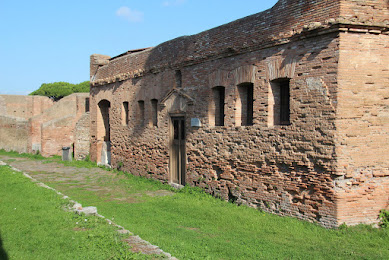 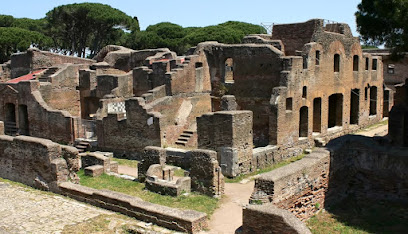 What you see in town now is all this bare brick, which is not how it looked in classical times. Back then the brick would have been covered either by plaster and whitewash or, for the rich and the public buildings, marble. There was so much marble that 17th-century builders set up a quarry here to dig it up and ship it to Rome, where it was used in Baroque churches and palaces. 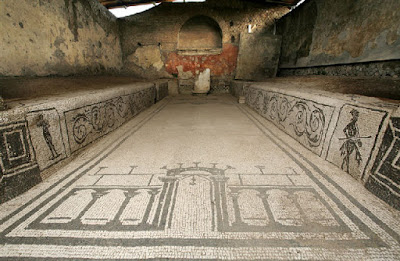 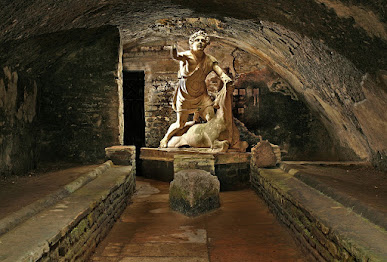 Among the interesting remains in the city are no less than eighteen Mithraea, or temples of Mithras. The cult of Mithras seems to have been popular with sailors, and in fact one of my favorite offbeat theories says it got started with pirates. 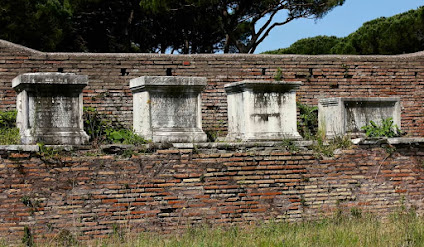 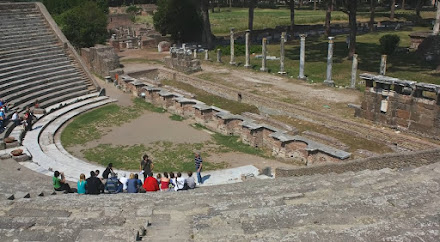 People say it is a wonderful place to visit, much less crowded than Pompeii. So let's imagine we're there, instead of in whatever cold and unevocative places we find ourselves on this February night. 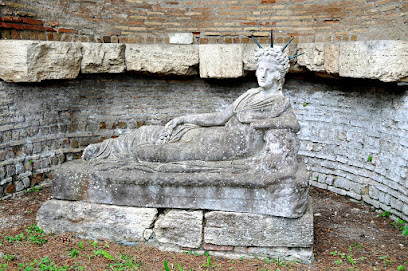 
I was there in 2015. In amazing silence and loneliness. Reverence prevails.

Thank you for this.