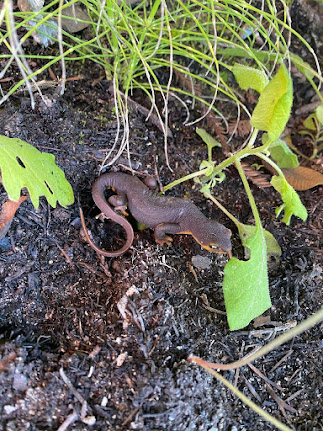 Salamander photographed in a burned-over area of California

The Breakthrough Starshot Initiative, which aims to send a micro-probe to Alpha Centauri fast enough to arrive in just 20 years.

3D map of all the buildings in the Netherlands, color-coded by age.

The Zanj Rebellion of AD 868-883, a mass uprising of African slaves in southern Iraq.

Review of Mike Konczal's new book, Freedom from the Market, which sounds interesting.

The glaciers wiped out earthworms from northern forests, and as the worms gradually return they are changing the forest ecosystem in ways that might warm the earth. Call it the "Earthworm Dilemma." (News article, original paper)

Nicholas Kristof writes about the ongoing puzzle of declining sperm counts and the possible harm from endocrine disruptors. (NY Times)

In the 2020 election, only 16 out of 435 Congressional districts chose one party for president and a different party for the House of Representatives; nine of those went for Biden and seven for Trump. That's the smallest amount of split-ticket voting in modern history.

Frustrated that it is getting ever harder to build new oil and gas pipelines, industry is pushing state governments to enact draconian laws against protesting on pipeline construction sites.

Total fertility in South Korea has been below 1.0 two years in a row. TNF below 1.0 means the population will fall by more than half each generation.

Long piece in the NY Times about Smith College, where feelings are running very high over race, class, privilege, etc. Everybody involved seems a little bit hysterical to me, which makes the campus a microcosm of America. Seems like college presidents spend a lot of time apologizing these days.

The race optimist: Chloé Valdary hates the "diversity, equity, and inclusion industry" and thinks the solution is to racial tension in the workplace is to teach love, community, and "enchantment." (Conor Friedersdorf at The Atlantic)

Anti-psychotic drugs sometimes work wonders, bringing suffering people back to manageable reality. But they all have side effects and many patients hate them, which creates a problem of people being released from hospitals, then stopping their meds and going crazy again. So Norway has created a program to treat psychotic patients without drugs.

T.S. Eliot's anti-Semitism: "It is generally assumed that anti-Semites hate Jews not for what Jews actually are, but for what they imagine Jews to be. That was true of Ezra Pound, who imagined that Jews were usurers responsible for social crisis and war. Eliot, by contrast, hated the Jews for what they really are: ironic."