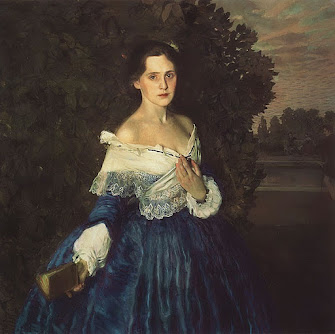 Konstantin Somov (1869-1939) was a Russian painter and graphic artist. His father was a curator at the Hermitage and he glided easily onto the Russian artists' career ladder: St Petersburg Academy of Art, studying under Il’ya Repin, two stints in Paris. He was somewhat influenced by trends in contemporary art but he also spent long hours in the Hermitage studying and copying Renaissance and Baroque works. Above is his first big hit as a painter, Lady in Blue, 1900. 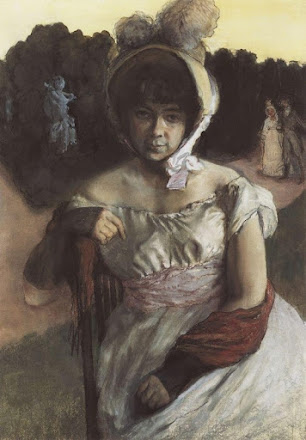 Somov did a lot of work, and I find the quality to be uneven; some of it wows me, but a lot of it is meh. It seems to me that he never hit on a style that worked for him in the long term and was always experimenting. Portrait of A.K. Benois, 1896. 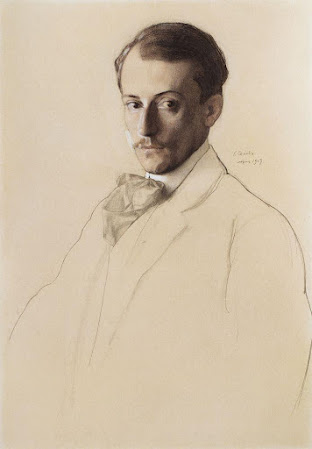 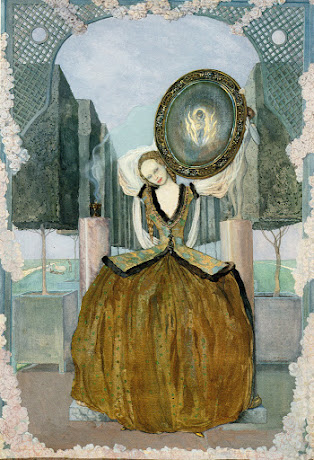 He also developed a sideline in illustration, his style much influenced by the English and French illustrators of that era. (The Magician, 1898. She is carrying out one of the standard acts of European magical practitioners, and also fairy tale magicians, which was to make images appear in mirrors or basins of water.) 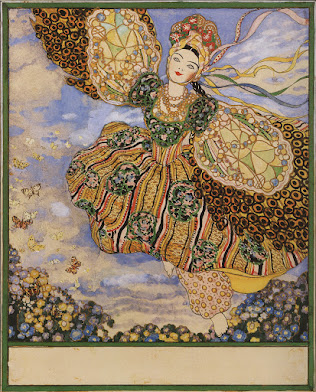 Firebird, 1907. Cover illustration for a book of poems by a friend. 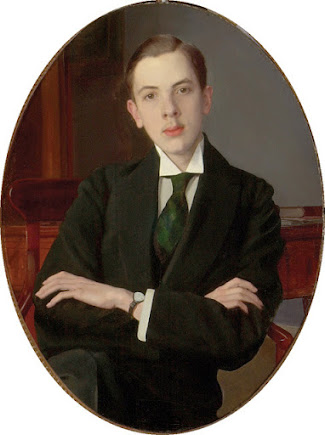 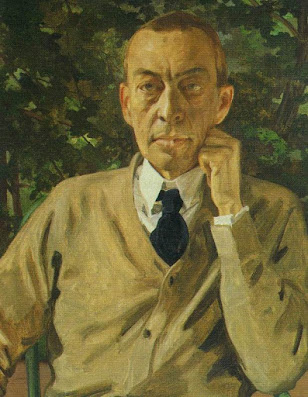 Somov was one of those Russians who initially supported the Revolution because he hated the Tsar so much, but then decided the Soviets were even worse. In 1923 he wrangled a spot as curator of an exhibit of new, Revolutionary art that toured the west, and in the US he jumped ship and became an exile. He was befriended by another exile, the composer Sergei Rachmaninoff (above). 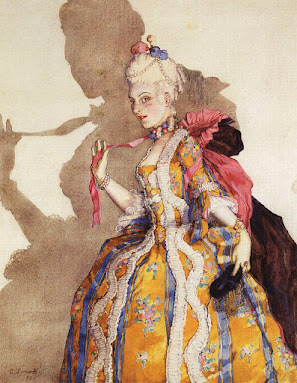 Like so many other Russian émigrés of that era he ended up in Paris. And like many other artists in that community he gravitated to the theater, where he found work designing sets and costumes, like the one above for a Mozart opera. 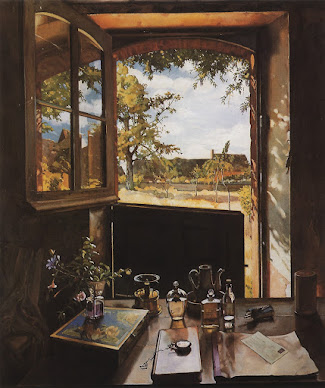 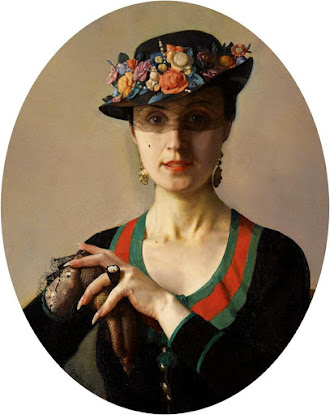 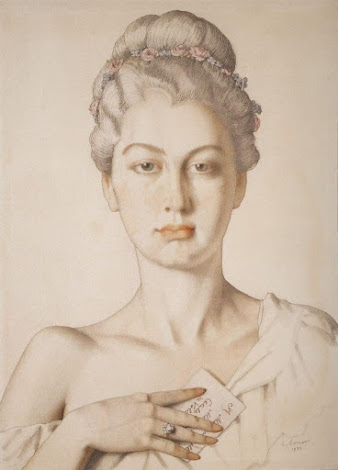 Cecile de Volanges, 1934
Somov never married; in a letter to a friend he wrote that he was simply too melancholic for love:

Unfortunately, I still have no romance with anyone - flirting is, perhaps, very light. But I'm tired of being without romance - it's time, otherwise life goes away and youth, and it becomes scary. I am terribly sorry that my character is heavy, boring, gloomy. I would like to be cheerful, light, so that everything is knee-deep, amorous and rip-off. Only such people have fun, interesting and not scared to live! 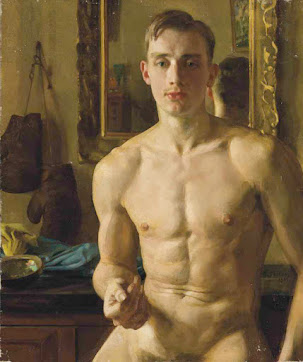 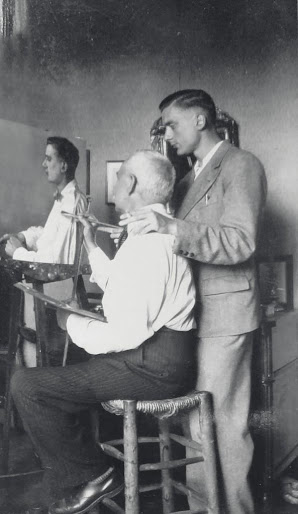 In Paris he struck up an intense friendship with a young Russian model, Methodiy Lukyanov. Looking at these pictures you have to think that this was a homoerotic relationship in some sense, but I can't find anyone who says outright that they were lovers or that Somov was gay, and Parisian artists of the 1920s were not shy about such things. So perhaps it remained Platonic, or perhaps Somov was just a very private man. Lukyanov died of tuberculosis in 1931, and Somov was bereft. But eventually he met another handsome young Russian man, Boris Mikhailovich Snejkovsk, of whom he also did erotic portraits; wikipedia tells us that "the exact nature of their relationship is unknown." 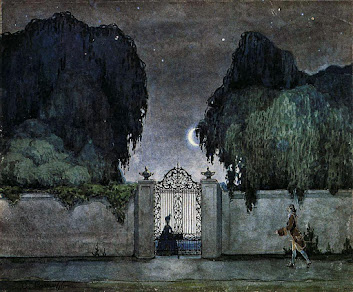 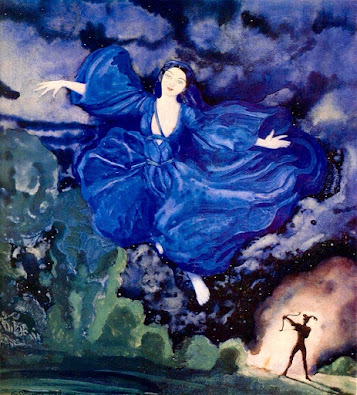 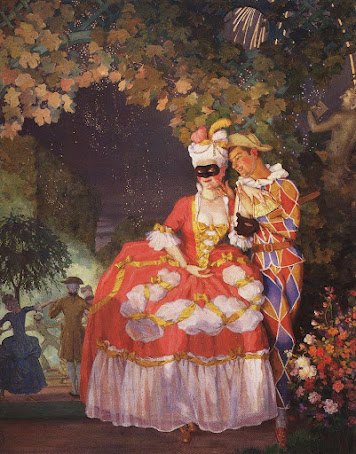 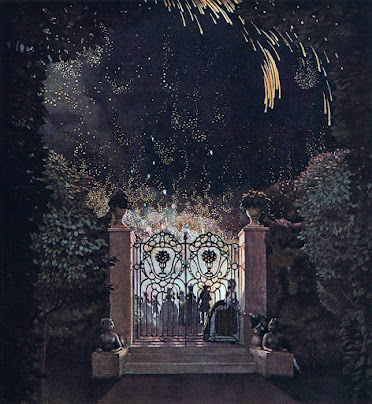