Glass was first made by men more than 4,000 years ago; exactly when depends on how you define glass, and since glass is a viscous fusion rather than a pure thing, it is hard to say exactly what it is or whether some things are glass or no. 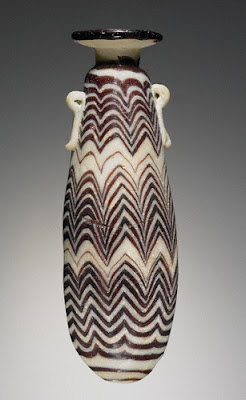 By 1500 BC glass-making had become a high art in Egypt and Syria. Among the most common forms was one the Greeks called the Alabastron. We call them perfume bottles, but they no doubt held many other things. Most are pointed or rounded on the bottom; this habit of making bottles that could not stand on their own troubled me throughout my youth, until one day it occurred to me that ancient houses had many more places where things could be hung than shelves on which things could stand.

Change was slow in those ancient times, and I have trouble guessing whether some of these vessels were made in 1500 BC or 100 AD. The same shapes and styles and decorative techniques recur over and over. 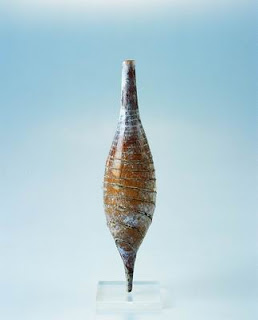 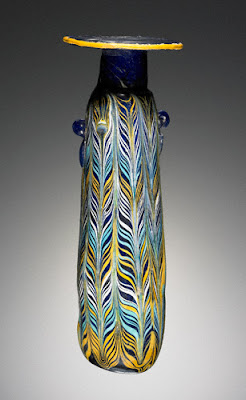 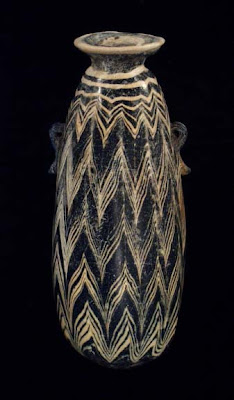 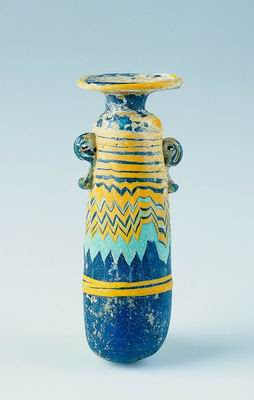 Glass blowing had not yet been invented. Many of these were made by wrapping glass rods, softened to make them bendable, around a wooden or clay form. Others were cast in molds.

Around 100 BC glass blowing finally was discovered, probably in Syria or Lebanon. This made glass much less expensive, and it became a common commodity in the Roman world. Glass makers had long known how to make pale aqua glass like what this bottle is made from, but it was used for contrast in compositions that were mostly dark, rich colors. After AD 200 tastes changed, and making the most transparent glass became the hallmark of excellence. Glass vessels from the late Roman world look very different from those of earlier times. In this, as in so much else, the changes of late Roman times mark the end of the ancient tradition and the birth of something new.
Posted by John at 12:52 PM