Today's Place to Daydream About: Tikal

The once great Maya city of Tikal is now a national park in Guatemala that protects both the vast Maya city and 575 square kilometers of rich rain forest. This makes is an appropriate site for one of these posts, and thus gives me a chance to tell two amazing stories. 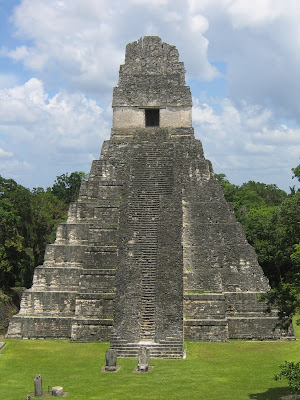 Tikal's tallest temple was once known as The Temple of the Grand Jaguar, but that name was made up for tourists and it is now called  by the more scientific Temple I. Progress! 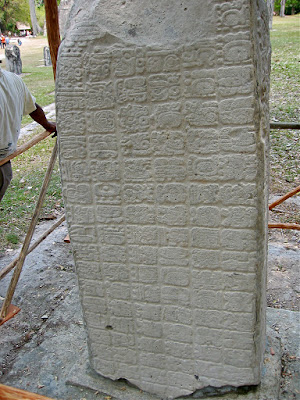 The first is the story of the rise and collapse of Maya civilization. Because the village of Ceren was buried by a volcano 1,400 years ago, creating a Pompeii-style situation, we know that Maya villagers of that time lived in houses remarkably like those of the 1950s. They were also using similar ceramics and baskets, eating much of the same food, wearing similar clothes and so on. So on one level Maya life continued on an uninterrupted arc for three or four thousand years. 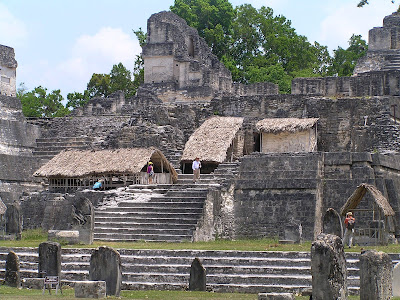 But some of the Maya, bored with village life, created an astonishing high civilization, of which Tikal was one of the greatest centers. The great central plaza was the center of a metropolis that in AD 700 held 80,000 to 100,000 people. And this was only one of hundreds of Maya towns and cities, all of which built temples and altars that look much the same. The population of the Guatemalan lowlands was extremely dense, as great as that of the Nile Delta in classical times or the Sichuan basin in old China. These towns and cites were linked together by roads, canals, and webs of political alliances that spread across hundreds of miles. This went on for about a 1,200 years. 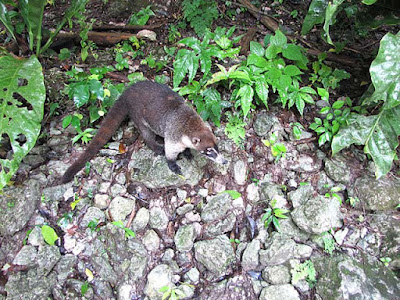 One of the coatimundis that badger Tikal tourists for food

And then one day the Maya got tired of living in stone cities and supporting a fabulously rich elite of kings and priests, so they got rid of them and went back to living in villages. The jungle covered the cities, and they were forgotten. 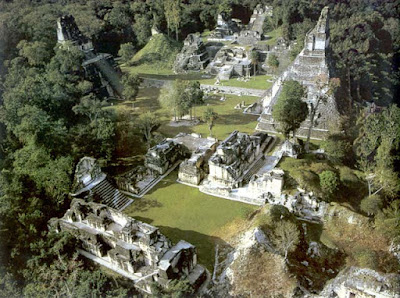 It's crazy, really; how could it happen? How could people who had developed the technology to support an urban civilization, things like irrigated fields and canalized swamps and networks of paved roads, just drop the whole business and go back to slashing and burning? Of course there are theories, of which the main characteristic is that they match the fears of the people putting them forward. In the 1970s people talked about overpopulation; now explanations focus on climate change. None are very convincing. 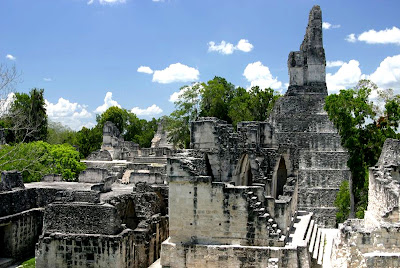 So let it just be that, the story of a dream shared by millions of people, a dream of brightly painted stone temples reaching to the sky, of grisly sacrifices, of astonishing costumes made of feathers and fur and cotton cloth, of rituals that went on for days, of great dynasties of mighty kings and queens, a dream that went on for a thousand years before people woke up and let it all slip away. 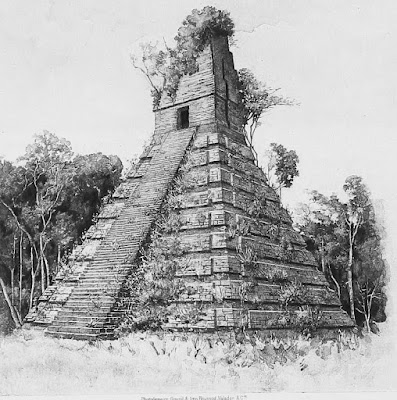 The other story tells how all of this was rediscovered. Tikal was never really forgotten, because of the immense size of its pyramids, but hardly anything was known about what they might have been. In 1848 an official expedition visited the site and broadcast to the world that this was a stone city built by an ancient civilization. Over the course of the next century fifty or so of the biggest Maya sites were mapped and named, and museums were filled with relics. But really our knowledge was paltry; little of what was written about the Maya before 1960 is still thought to be true.

The Tomb of Jasaw Chan K'awiil I or Ah Cacau, buried in AD 734 inside Temple I at Tikal, as Displayed in the Museum at Tikal

Two generations of archaeologists have revolutionized Maya history. The insights gleaned from a hundred thousand excavations have built up like a cresting wave, sweeping away a library's worth of false assumptions. Every pot, every tomb, every house had added to the story. 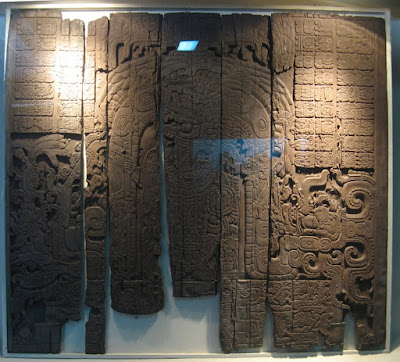 But the key event was the deciphering of the Maya script between about 1960 and 1990, which opened up the Maya world to us: now we know vastly more about them, including their names. 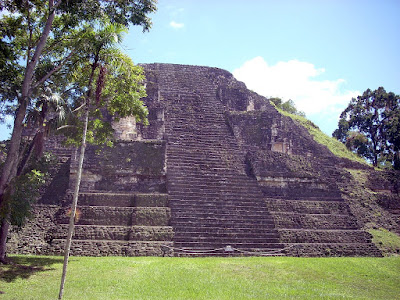 For example we know that the people of Tikal thought their royal dynasty was founded by Yax Ehb Xook in the 1st century AD. The line of kings (and one queen) stretched uninterrupted down to 14 January 378 AD, when king Chak Tok Ich'aak was killed in a way no inscription explains. On the same day, a man named Siyah K’ak’ (Fire Is Born) arrived in the city. The inscriptions title him Lord of the West. He was a foreigner who served a lord identified using a non-Maya hieroglyph of a spearthrower combined with an owl. This glyph was, we think, the emblem of the ruler of the great metropolis of Teotihuacan in the distant Valley of Mexico. Rather than becoming king himself Siyah K’ak’ installed a young son of Spearthrower Owl on the throne and ruled as regent. After that time the art of Tikal depicts kings and warriors dressed in the style of Teotihuacan. 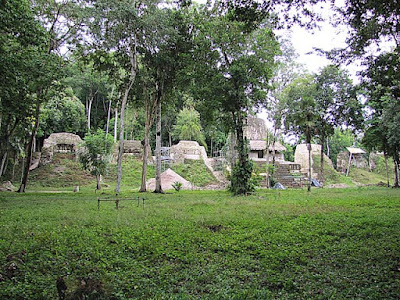 This seems to have been a conquest of sorts. Tikal became for a century or so the client of Teotihuacan, their representative in the Maya lowlands. But the new rulers rapidly adapted Maya ways and the alliance with Teotihuacan allowed Tikal to become one of the two dominant powers in the Maya heartland, launching a centuries-long rivalry with Calakmul for pre-eminence in the region. 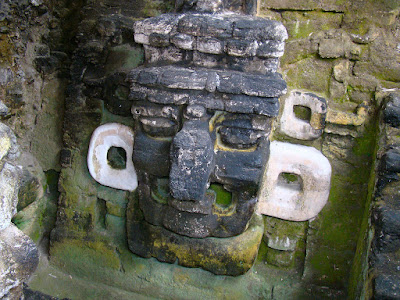 None of this was known even twenty years ago. As more inscriptions are found and translated, and scholars' knowledge of the script continues to improve, more amazing stories will emerge, and our knowledge of Maya history and culture will continue to deepen. 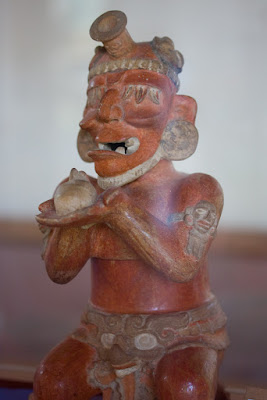 So let's imagine ourselves at Tikal, stepping off the bus after the hour-long ride from Flores, stopping by the museum to see some of the wondrous artifacts from the site and then strolling down a path that follows a Maya causeway 1300 years old 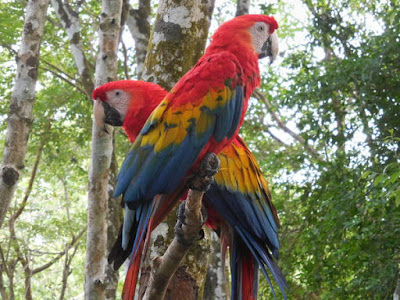 watching for monkeys and enjoying the antics of the half-tame macaus, passing still overgrown mounds with bits of masonry protruding from the earth 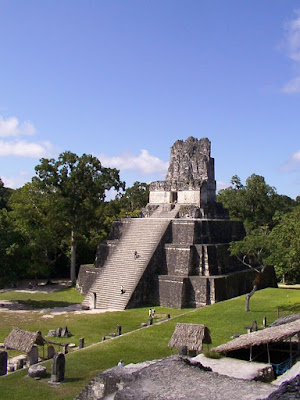 until we emerge in the central plaza, one of the most wondrous archaeological sites in the world. 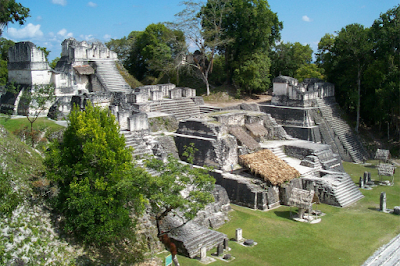 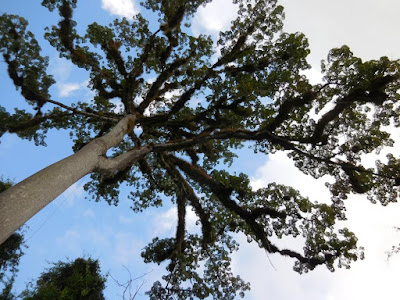