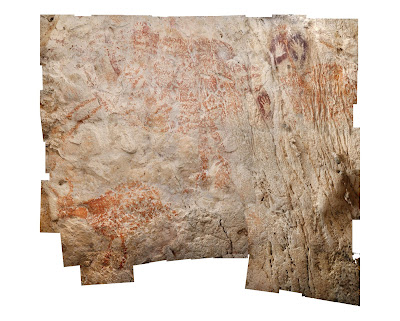 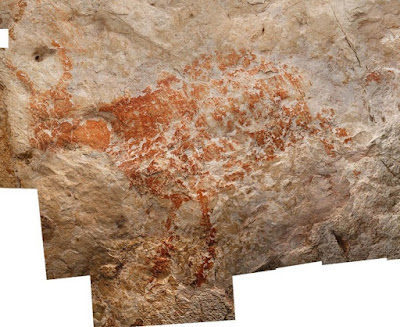 This crude drawing of a deer or wild cow was found in a limestone cave on Borneo. It was dated by uranium-thorium dating of the "flowstone" that had accumulated on top of it to 40,000 years ago.

This makes it for now the earliest work of figurative art known; everything older is an abstract assemblage of lines. (Yes, so far as we know abstract art comes before figurative.) I don't take this literally, though. Uranium-thorium dating is better for stuff a million years old than anything this young, and the layer of stone they are dating is very, very thin – after all, you can see through it – which makes it hard to be certain you have an uncontaminated sample. So I take the date as an indication rather than a hard number. Plus, the record for oldest cave painting keeps being broken  every year or so as this technique becomes more common, and there are now several examples more than 30,000 years old. Some people think it is interesting that half come from Europe and half from Indonesia, but I suspect that is just an artifact of preservation conditions. Surely the making of figurative art goes back at least to 60,000 years ago when other signs of full modern human behavior start to show up regularly in the archaeological record
Posted by John at 7:49 AM