The Short, Hungry Life of the Moneen Cave Boy 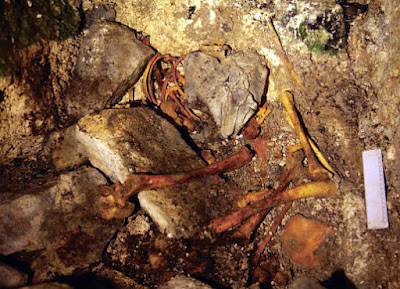 Back in 2011 a skeleton was found in a cave near the village of Ballyvaughan in County Clare, Ireland. The burial was intensely studied and the results have now been published. The skeleton was so short, a hair over 4 feet, that the excavators thought it was a young child. Analysis of the teeth, however, showed that it was a teenager of 14 to 16. This was short even for the time, a size more typical for an 11-year-old. A close look at the bones revealed that this child had suffered from severe malnutrition and repeated bouts of near starvation. DNA analysis showed that this was a boy. Radiocarbon dating pointed to a time of death between 1520 and 1670; the excavators think he might have died during the Commonwealth, 1640-1660, when Clare was the scene of repeated fighting and several recorded famines.


We found the remains within a small rectangular niche in the wall of the cave. It was a small space, just about big enough for a teenager to crawl into. The position of the bones suggests the boy curled up in this small space and died there, alone in the cold. There is no evidence that this was a murder victim or a corpse that had been hastily disposed of in the cave. It seems likely, based on the present evidence, that the boy was sheltering in the cave. He may have been crossing Moneen mountain; he may have been fleeing a battle or attack; or he may have been herding sheep in the uplands. Whatever the case, it seems he dropped through the narrow opening in the cave roof, crawled into the niche in the cave wall, and died there unbeknownst to his family or community. All in all, the excavation provided a very poignant insight into a life that was harsh and ended tragically for this boy in the not too distant past.