The Skeletons of Roopkund Lake, or, Greeks Lost in the Himalayas 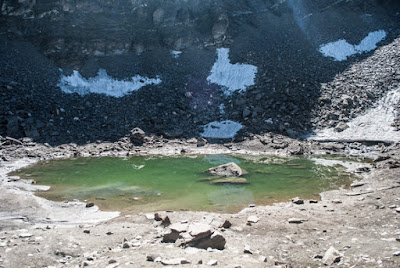 Here's a great example of the things that good genetic testing will continue to tell us about mysteries of the past:


The skeletons of Roopkund Lake: Genomic insights into the mysterious identity of ancient Himalayan travelers

The high-altitude lake of Roopkund, situated over 5000 meters above sea level in the Himalayas, remains frozen for almost 11 months out of the year. When it melts, it reveals the skeletons of several hundred ancient individuals, thought to have died during a massive hail storm during the 8th century, A.D. There has been a great deal of speculation about the possible identity of these individuals, but their origins remain enigmatic. We present genome-wide ancient DNA from 17 individuals from the site of Roopkund. We report that these individuals cluster genetically into two distinct groups-consistent with observed morphological variation. Using population genetic analyses, we determine that one group appears to be composed of individuals with broadly South Asian ancestry, characterized by diffuse clustering along the Indian Cline. The second group appears to be of West Eurasian related ancestry, showing affinities with both Greek and Levantine populations. 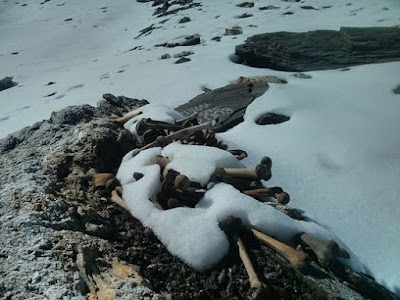 Spin your scenario for getting a large party of Levantine Greeks to the Himalayas in the 8th century. Were they the descendants of one of Alexander the Great's colonies? Or had they been led east by a visionary who imagined they might find Prester John and persuade him to bring his armies west to free Jerusalem from Muslim rule?
Posted by John at 5:49 PM

"Spin your scenario for getting a large party of Levantine Greeks to the Himalayas in the 8th century."

With just a little bit of reading, I've got one that seems pretty straightforward and plausible.

Tang Dynasty China was in regular contact with the Byzantine Empire, allegedly as early as 643 CE, and certainly on-again, off-again for centuries thereafter.

The Tang Empire also reopened the Silk Road in 639 CE, and kept it operating in an on-again, off-again manner throughout those same centuries.

The southern branches of the Silk Road also passed through that particular region of the Himalayas, none of the major paths too terribly far from Roop Kund.

It seems pretty easy to surmise this was a Byzantine trade envoy of some sort. Why and how they ended up at Roop Kund in particular? That's a bit tougher to riddle out.

It's a lake high up in the mountains, a trio of mountain peaks known collectively as Trisul, rather remote and seemingly with nothing of much interest there. But in every direction except east and northeast, there are inhabited places at lower elevations which say a lot of traffic.

In particular, one of the major passes across the Himalayas is to the north, and runs from northeast to southwest. In the opposite direction, to the south, is another major road that runs from the southeast to the northwest, which ultimately connects.

If I had to hazard a guess, I'd suggest that perhaps these Greeks wanted to get from the north to the south, or vice versa, and didn't like the idea of swinging out so far west to get around the mountains on the major roads. From there, it doesn't seem like much of a stretch to think that impatient and inexperienced foreigners might decide it would save time to simply cut across this trio of mountains - perhaps even avoiding travel tolls on the roads.

Moreover, if we assume that both genetic groups of skeletons were deposited in the lake at the same time, during the same storm, we can probably conclude the locals were acting as guides for the Greeks to help them attempt the crossing.

It may have been that the trek was not seen as particularly dangerous under normal conditions, and the locals were not worried about taking the shortcut. This seems plausible, given that the evidence suggests they died from a sudden violent hailstorm, one which probably was not able to be predicted in advance as they were planning their route over the mountains.

Levantine Greeks in the 8th century puts me in mind of the Umayyads. Syrian Greeks, both Islamic converts and not, were the major component of their servant and bureaucratic manpower pool. So I imagine this may represent the household of an Umayyad governor of one of the caliphate's eastern provinces--perhaps seeking refuge in the Tibetan Empire from the Abbasid Revolution at mid-century. Perhaps their master had been governor of Zabulistan or a province like that, whose population would have included a significant Indian portion as well.

Roopkund seems far south to me for the Silk Road, whose main route ran through Wakhan about 550 miles to the northwest. You don't go for silk by heading toward the heart of Tibet or north India. Which is not to say that this couldn't have been a party of merchants anyway (and conceivably they could have been heading to Wakhan from Bengal, hoping to loop around the Tibetan Plateau).

Perhaps they were west and south Asians fleeing China during the An Lushan revolt, which saw at least one massacre of foreign, mostly Islamic, merchants in Canton.

Buddhist pilgrims represent another possibility. My impression is that the Greco-Bactrian civilization built by Alexander's leavings became strongly Buddhist. But they'd probably have to be a pretty inbred group of Greeks to survive that long as a genetically distinct population.

It be interesting to know what, if any, animal skeletons accompany this party.

Wikipedia says, "Radiocarbon dating of the bones at Oxford University's Radiocarbon Accelerator Unit determined the time period to be 850 CE ±30 years." This is without citation. If it's accurate, this would preclude the Umayyad connection.

A further remark in the Wikipedia article states, that a portion of the party "were closely related—with DNA mutations characteristic for Konkanastha Brahmins (Chitpavans) from Maharashtra. A DNA test conducted by the Centre for Cellular and Molecular Biology (CCMB), Hyderabad, indicated that three samples with unique mutation in mitochondrial DNA, matched with those of the Chitpavans." Note that there are editorial comments contesting these cites.

All that said, to the extent that this information is accurate and should be combined with the new Greco-Levantine findings, I could imagine a party of Levantine merchants settled on the Malabar coast and interested in commerce with Tibet teaming up for security with a group of Brahmins from Maharashtra on their way to a pilgrimage at the local festival (also mentioned in the Wikipedia article).