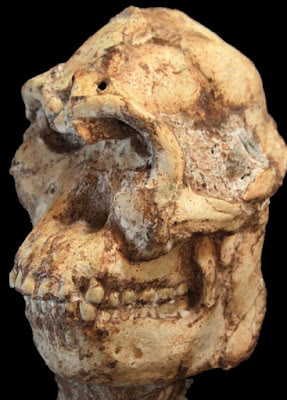 "Little Foot" is what the discoverers call an amazing, largely intact skeleton of an Australopithecus found in South Africa. Now a new dating technique suggests that it may be 3.6 million years old, about half a million years older than "Lucy". National Geographic:


Previous attempts to date Little Foot have yielded highly uncertain results, ranging from 2.2 million years to over 4 million years old. The dating technique used in the new study, called isochron burial dating, calculates the age of a specimen based on when it was last on the surface, exposed to cosmic radiation that produces radioactive isotopes of the elements aluminium and beryllium. When the sediments washed into the cave, the isotopes stopped accumulating, and instead begin to decay at a steady rate. Nine out of eleven samples from rock surrounding the skeleton gave an age of 3.67 million years. 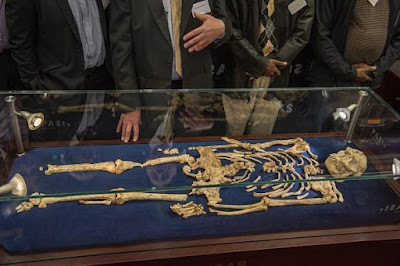 I think paleontologists spend too much time an energy fighting over which fossil was first and which species they belong to. The long-running South vs. East Africa debate is irritating and probably unresolvable. But the ever-growing number of old human and human-like fossils is fascinating, and the diversity of their shapes shows evolution in action in a compelling way. The broad distribution of Australopithecus afarensis is also interesting, since fossils have now been reported from South Africa to Chad. This was not a shy, rare species, but a very successful one that used its slightly-smarter-than-a-chimp brainpower and upright posture to spread across the continent, hinting at the future dominance of its lineage.
Posted by John at 7:59 AM