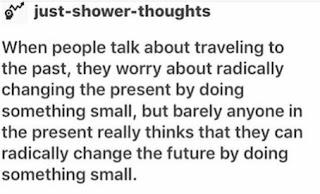 Like, I could start a movement to promote some liberal social value, and the backlash could help conservatives keep power a couple of decades from now? Cool!

This person has clearly never watched the Star Trek episode where Kirk goes back in time, saves some anonymous pedestrian from a speeding car, and thus helps the Nazis win WWII.

I thought that was exactly the kind of story they were talking about.

City on the Edge of Forever, original story by Harlan Ellison.

"She was right, but at the wrong time."

"Save her, do as your heart tells you to do, and millions will die who did not die before."

In some of these stories, the act that changes the future is something significant like saving a life. But it others it is something trivial; in one I remember it was killing a butterfly. I take the original shower thought as an invitation to see all your acts as significant. To think that they might reverberate through time. Which, to me, means to make them as kind and as wise as you can.