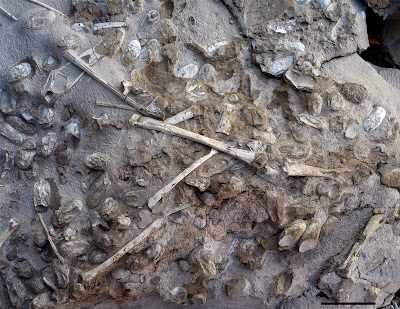 
The species that laid the recently discovered eggs is known as Hamipterus tianshanensis. It lived during the early Cretaceous period and its wings stretched about 11 feet long. It also sported a thick forehead crest and had a mouth full of pointy teeth for snatching fish.

Xiaolin Wang, a paleontologist at the University of Chinese Academy of Sciences, Beijing, and lead author of the study, discovered the eggs in a 120-million-year-old pterosaur boneyard in the arid Gobi Desert in northwestern China. When the pterosaurs thrived, the place was most likely a lush lakeshore. The team suggested that a strong storm most likely washed the eggs into the lake, where they were buried alongside pterosaur bones and preserved for millions of years.

This is strong evidence that these pterosaurs nested in big colonies like some modern seabirds.
Posted by John at 5:02 PM