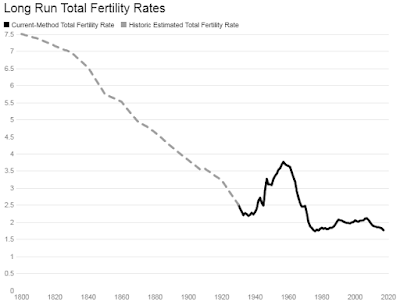 Here's a long-term look at total fertility in the U.S. put together by Lyman Scott. He is something of a baby bust alarmist, but all of this data comes from the Census Bureau and especially since 1930 it is better than almost any other long-term data set we have.You can see that the rate has jumped around a lot in the 20th and 21st centuries. After the postwar baby boom, the rate fell steeply, hitting a low of 1.74 lifetime births per woman in 1974. But that was the bottom of a severe recession, and the rate then climbed gradually back up, reaching 2.12 in 2008, right around replacement. Then came the crash and the great recession, and the rate started to fall. 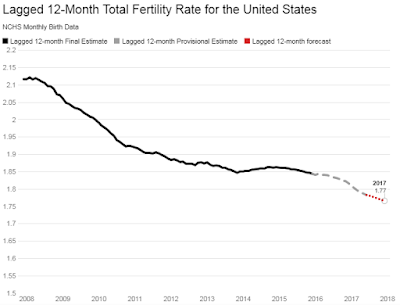 What worries Lyman is that the good economic times of the past two years have not caused the birth rate to rise; instead the rate has continued to fall. The data for 2017 is estimated, but we have pretty good information on births so the final figures are usually close to the running estimates.

Lyman worries that this implies some fundamental long-term change in the desire of couples for children, but I am skeptical about that. This seems to me another sign that although the U.S. economy has done well lately by the usual metrics, this has not reached the mood of the people, which is still recession-level bad.
Posted by John at 5:06 PM