The Twin Mysteries of Anasazi Abandonment and Archaeological Faddism 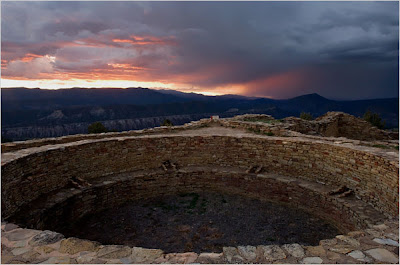 In the 13th century, the people we call Anasazi abandoned their towns at Mesa Verde, Chaco Canyon, and other sites on the Colorado Plateau and migrated to southern Arizona and Mexico. The Hopi and Pueblo, we think, are their descendants, as are many people of northern Mexico. Why did they leave their homes?

Thirty years ago archaeologists thought they had found the answer when they discovered that around AD 1250 the region was hit by a terrible, decades-long drought. This was one of the great successes of the ecological paradigm that dominated archaeology at the time and sought to explain the past in scientific terms. The thing is, as George Johnson explains in this fine article, the places they went to were even drier than the ones they left. And when wet weather returned to the Colorado Plateau in the 1300s, the Anasazi stayed away. So while the drought may have played a part in these events, in cannot be the whole explanation.

Now a new generation of archaeologists has come along practicing a new paradigm we might call Culturalism. The leader of this school, British archaeologist Ian Hodder, has hypothesized that neolithic towns in the Middle East grew up not so much for economic reasons, as centers of agriculture or trade, but as centers of religious and cultural life. Some of Hodder's followers have been studying the American southwest, and they see indications that cultural changes may have been behind the move:

By studying changes in ceremonial architecture and pottery styles, Donna Glowacki, an archaeologist at the University of Notre Dame, is charting the rise of what may have been a new puebloan religion. . . . Though the dogma may be irrecoverable, Dr. Glowacki argues that it rapidly attracted adherents. A center of the movement, she said, was the McElmo Canyon area, west of Mesa Verde. Excavations indicate that the population burgeoned along with the new architecture. An influx of different pottery designs suggests immigrants from the west were moving in. Then around 1260, long before the drought, the residents began leaving the pueblo, perhaps spreading the new ideology.

Other archaeologists see evidence of an evangelical-like religion — the forerunner, perhaps, of the masked Kachina rituals, which still survive on the Hopi and Zuni reservations — appearing in the south and attracting the rebellious northerners. . . .

Which is very interesting, but I confess that the way this fits in so neatly with the theories currently dominant in the field makes me wonder. I am waiting for the return of nineteenth-century style explanations based on invasions and migrations, since, after all, many Anasazi sites were obviously destroyed with great violence:

Villagers were scalped, dismembered, perhaps even eaten. Families were slain inside their dwellings, and the pueblo was burned and abandoned. Curiously, as was true throughout the region, the victors didn’t stay to occupy the conquered lands.

To be fair, the article doesn't present the discussion as one between competing, mutually-hostile schools or isms given to twisting the evidence to suit their own philosophies. There's much bet-hedging and use of terms like perhaps, may have, etc., and a computer project designed "to draw together the skein of causes and effects." The participants seem quite capable of thinking about several approaches at once. Perhaps we should take seriously their seeming wish to be taken as genuinely curious about their material (rather than simply wishing to shape things in the image of their own minds).

That does seem to be true, and I hope it is a positive sign. Perhaps we are moving toward a future where academic movements will lose their vehemence, and we can try out different ideas like we can, in our freewheeling day, try out different hair lengths or hem lines or whatever.