Is Cancer a New Disease? 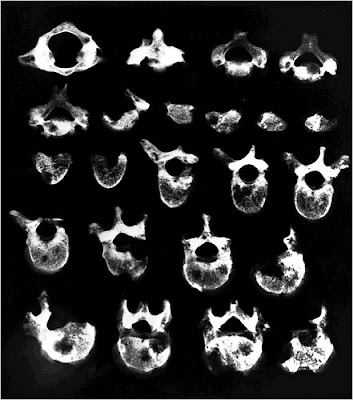 A few months ago I posted about a study of ancient cancer that concluded it was quite rare in ancient times. Now the NY Times has a very interesting feature by George Johnson arguing that the evidence won't support this conclusion. After acknowledging that the authors of the previous study were only able to document 200 cases of cancer in the archaeological record, Johnson goes over all the reasons why this number is likely to be too low: most cancers don't affect bone and so leave little trace, many cancers are very rare, only very recently have archaeologists had the technology to look inside mummies or skeletons for evidence of tumors. And:

Even with all of that taken into account, there is a fundamental problem with estimating ancient cancer rates. Two hundred suspected cases may not sound like much. But sparsity of evidence is not evidence of sparsity. Tumors can remain hidden inside bones, and those that dig their way outward can cause the bone to crumble and disappear. For all the efforts of archaeologists, only a fraction of the human bone pile has been picked, with no way to know what lies hidden below.

Anne L. Grauer, president of the Paleopathology Association and an anthropologist at Loyola University of Chicago, estimates that there are roughly 100,000 skeletons in the world’s osteological collections, and a vast majority have not been X-rayed or studied with more modern techniques.

According to an analysis by the Population Reference Bureau, the cumulative total of everyone who had lived and died by A.D. 1 was already approaching 50 billion, and had nearly doubled by 1750. (The analysis refutes the oft-made assertion that more people are alive today than have ever lived on earth.) If those figures hold, the number of skeletons in the archaeological database would represent barely one ten-thousandth of 1 percent of the total.

Within that minuscule sample, not all of the remains are complete. “For a long time archaeologists only collected skulls,” said Heather J. H. Edgar, curator of human osteology at the Maxwell Museum of Anthropology at the University of New Mexico. “For the most part, there’s no way to know what the rest of those people’s skeletons might have said about their health.”

Not only is the evidence bad, but really don't know what portion of modern skeletons (or mummies, if we made them) would show evidence of cancer. Like most interesting questions, this one remains open.

Since I found this piece so interesting and could not remember ever hearing of this George Johnson before, I looked him up. He has been contributing to the Times on archaeological and scientific topics for years, and here you can find links to a lot of other things he has done.
Posted by John at 7:26 AM