The End of the Semester 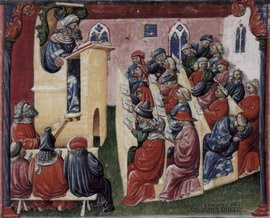 I just finished grading my final exams, and now I can look back across my semester-long teaching experiment. I have been teaching Medieval History, a 200-level course, at Hood College, a small, not-very-selective private school in Frederick, Maryland. I had 25 students in my class. After talking with some friends of mine who teach full-time, I decided to try the course with no textbook and as few facts as possible. I asked them to learn four dates, at least approximately: the sack of Rome in AD 410, the coronation of Charlemagne in AD 800, the First Crusade in 1096-1099, and the Black Death in 1348. I discussed only a handful of other events -- the founding and spread of Islam, the collapse of the Carolingian empire and the resulting spread of anarchy and castle-building, the great economic and cultural growth spurt of the high middle ages, and the establishment of national kingdoms in England and France. Otherwise what we did was read source documents and talk about them. Sixty percent of their grade was determined by two papers on original sources and class discussion, and the exams, all essay questions, focused on the themes we drew from the readings. We read a big chunk of Gregory of Tours' History of the Franks, the Life of St. Radegund, a little of the Koran, Einhard's Life of Charlemagne, some administrative documents from Charlemagne's time, a short Viking story from Iceland (Bolli Bollason's Tale), some bits of chronicles from the anarchic period of the 10th and 11th centuries, Peters' collection of sources on the First Crusade, some letters of Abelard and Heloise, some mystical writings by Hildegard of Bingen, a courtly romance by Marie de France, some chunks of Froissart's Chronicles covering the Hundred Years War and the English Peasants' revolt, and other short odds and ends. I put the emphasis in every class in trying to understand something about the past from what was written in the documents.

One reason I decided to take this approach was that I have recently watched three of my children go through middle school world history, and I noticed that they were expected to learn a lot of the basic facts of medieval history in the 8th grade. I decided to assume that my students remembered most of that or would readily recall it, and that I was certainly not going to spend my time restating things they should have learned at 13.

How did it go? Pretty well. It was certainly more fun for me than lecturing about serfdom and church reform would have been. After grading the exams, I can say that about half the class got much of what I was getting at. That half ended up with grades in the high B to A range, many of them falling in a cluster I will somehow have to split into B+ and A-. I am not an especially hard grader, and I could have made the grades lower, but all of those people certainly got something out of the class. Trailing down from there were people who either didn't care enough or weren't well enough prepared for the class, including 4 who barely passed. (Nobody failed.) Perhaps a more traditional class would have been more useful for those students, but I doubt it. Even if they had learned a lot of facts, they would soon have forgotten them, so if my approach taught them nothing about the Middle Ages they are not likely to be any worse for it, and at least they wrote two papers.

So I am pleased, on the whole, and if I teach this class again I will make adjustments but use essentially the same structure.
Posted by John at 7:11 AM