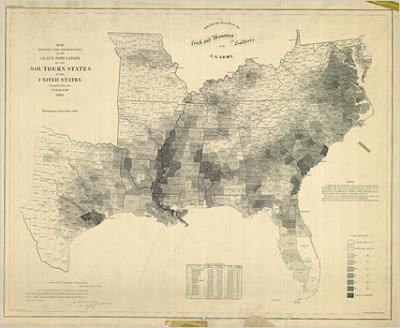 This map was prepared in 1861 by the US Coast & Geodetic Survey, based on the data in the 1860 census. It uses what was then a new technique in the display of quantitative information, by shading the map to show the percentage of slaves in the population of each county. Abraham Lincoln, a railroad man and a fan of new technologies, "loved the map and almost always had a copy on hand." You can peruse an interactive version of the map here.

Anyone who works with 19th-century American maps becomes a fan of the coastal survey, who produced the most accurate maps ever made of America before the advent of Lidar technology in the past two decades.
Posted by John at 7:20 AM