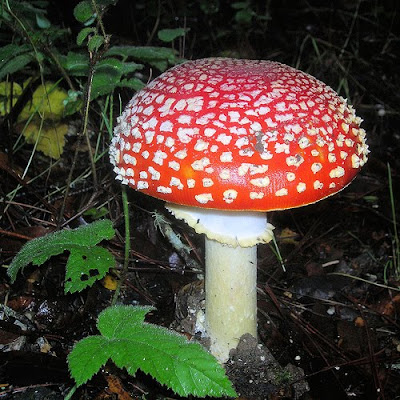 From a little post on animals that seek out psychedelic plants, this note about reindeer:

There is evidence from around the world of animals deliberately consuming such plants, and legends about plants used in sacred rituals often include references to animals introducing them to mankind.

One such species . . . is the reindeer, which goes to great lengths to search out the hallucinogenic fly agaric mushroom (Amanita muscaria) — the one with the white-spotted red cap that garden gnomes like to sit on. Eating the toadstool makes reindeer behave in a drunken fashion, running about aimlessly and making strange noises. Head-twitching is also common.

Fly agaric is found across the northern hemisphere and has long been used by mankind for its psychotropic properties. But its use can be dangerous because it also contains toxic substances. Reindeer seem to metabolise these toxic elements without harm, while the main psychoactive constituents remain unmetabolised and are excreted in the urine. Reindeer herders in Europe and Asia long ago learnt to collect the reindeer urine for use as a comparatively safe source of the hallucinogen.

I have long thought that the human craving for mind-altering substances says something profound about our minds, and even about evolution itself. (If it worked the way we wish it did, we wouldn't need drugs.) Knowing that many species of animals also seek out recreational drugs extends the analysis. Many animals, it seems, long to change how it feels to be alive, suggesting that it sometimes doesn't feel very good to them, either.
Posted by John at 7:09 PM